Alongside the FIFA U-17 World Cup India official emblem, the logo for Kochi venue will form a crucial link in the promotions and communications regarding the host city. 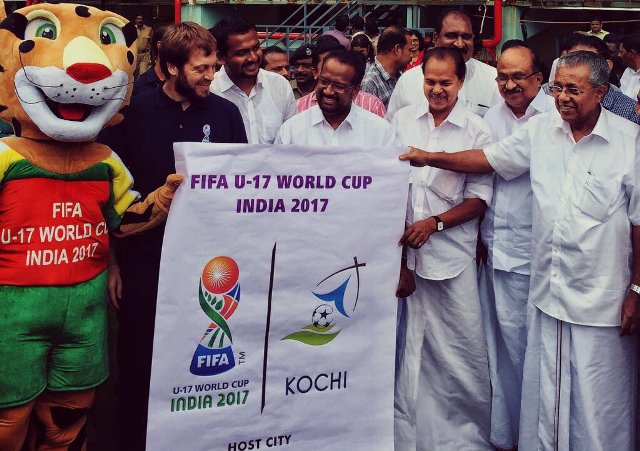 Kerala Chief Minister Pinarayi Vijayan on 28 August 2017 launched the host city logo for Kochi, one of the venues of FIFA U-17 World Cup India 2017.

The logo launched by the CM represents Kochi’s identity and will also serve as a valuable tool in linking the local community in a global World Cup.

Alongside the FIFA U-17 World Cup India official emblem, the logo for Kochi venue will form a crucial link in the promotions and communications regarding the host city.

The tournament will be hosted in the Jawaharlal Nehru Stadium of the city.

• In October 2016, Kochi became the first Indian city to be officially declared as one of the venues for hosting the 2017 FIFA U-17 World Cup.

• In February 2017, the official Mascot of the FIFA U-17 World Cup India 2017 was unveiled at Jawaharlal Nehru Stadium in New Delhi.

• The Official Mascot is a clouded leopard called Kheleo. The clouded leopard is a vulnerable wild cat whose habitat extends from the Himalayan foothills to mainland Southeast Asia.

• In May 2017, ticket sales for the FIFA Under-17 World Cup 2017 were officially launched at New Delhi’s Jawahar Lal Nehru Stadium.

• This will be the first FIFA tournament hosted by India.

• The final will be held at the Salt Lake Stadium in Kolkata on 28 October 2017.