Kofi Annan, former UN Secretary-General passed away on August 18 after a short illness. He was 88. He was the only African to helm the post of UN Chief. He served for two terms from 1997 to 2006. He was also awarded the Nobel Peace Prize in 2001 for his humanitarian work.

Kofi Annan, former UN Secretary-General passed away on August 18, 2018 after a short illness. He was 80.

In a statement announcing his death, the Kofi Annan Foundation described him as a "global statesman and deeply committed internationalist who fought throughout his life for a fairer and more peaceful world".

Annan passed away at a hospital in Bern, Switzerland. He had been living near Geneva for several years. His home country, Ghana, has declared a week of national mourning. He is survived by his wife Nane and three children.

• Annan was awarded the Nobel Peace Prize in 2001 for helping to revitalise the United Nations, during a period that coincided with the Iraq War and the HIV/Aids pandemic.

• In 2007, after his term ended in the UN, he set up his own foundation ‘Kofi Annan Foundation’ aimed at promoting global sustainable development, security and peace.

• A year later, he successfully helped negotiate a power-sharing deal to end post-election violence in Kenya. In his tribute, Raila Odinga, Kenya’s opposition leader who had signed the agreement, called Annan the man who stepped in and saved the country from collapse.

• In 2012, Annan was made the chair of The Elders, an international peace and human rights advocacy group founded by South Africa's Nelson Mandela.

• In February 2012, Annan was appointed as the UN–Arab League Joint Special Representative for Syria, to help find a resolution to the ongoing conflict there. However, he quit his post after only six months in the role, after becoming frustrated with the UN's lack of progress with regard to conflict resolution.

• In September 2016, Annan was appointed to lead a UN commission to investigate Myanmar's Rohingya crisis.

As the head of the United Nations peacekeeping operations from 1993 to 1997, Annan faced heavy criticism for the UN's failure to halt the genocide in Rwanda in 1994 that lead to the killing of more than 800,000 Rwandans and the massacre of 8,000 Bosnian Muslims by Bosnian Serb forces at Srebrenica in 1995.

Later, after the US-led invasion of Iraq, Annan and his son were accused of being involved in the "oil for food corruption scandal" that led some to call for his resignation, though he was later exonerated. 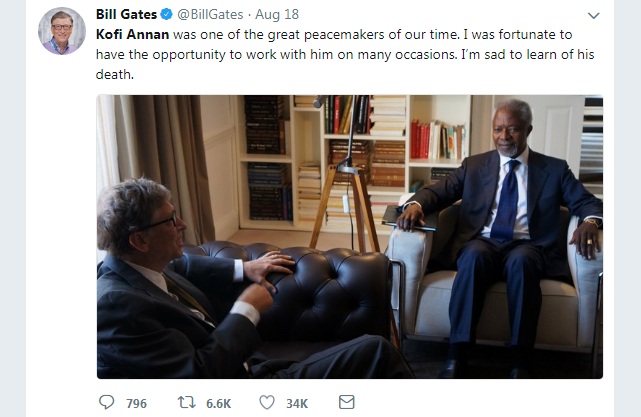