LAC Border Clash between India & China: What is LAC Line of Actual Control, Where is it located, What Happened 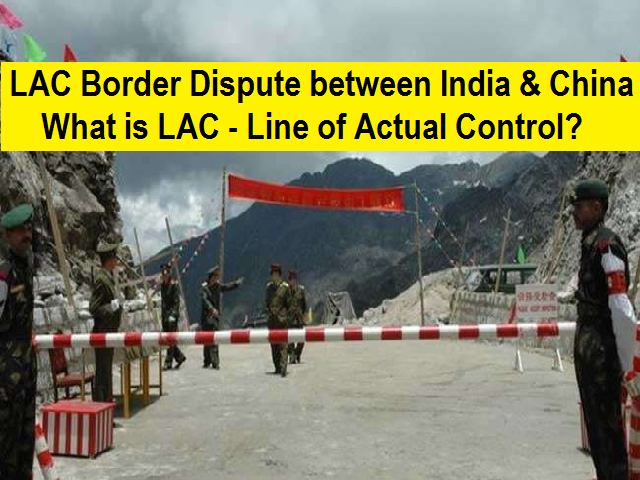 LAC Border News: India & China got engaged into a violent face off on 15th June night when the troops of both the armies fired at each other in the Galwan Valley in eastern Ladakh. Both the nations suffered several casualties. Indian Army lost around 20 of its soldiers. Though Indian & Chinese armies got disengaged on 16th June, it is anticipated that the tensions between India and China may grow over the disagreements over the Line of Actual Control (LAC) in eastern Ladakh. China has been continuously building up its military presence along the LAC by deploying its armed forces and artillery guns. The areas where China is growing its military presence are close to the territory of India from where China can reach Indian locations in a few hours. In this article, we have shared below what is LAC, where is it located on Map, why it is a disputed area between India & China and what is the difference between LOC and LAC.

Why the LAC is in News?

The locals of eastern Ladakh have reported the movement of hundreds of army vehicles along the LAC over the past few weeks. These vehicles are parked just 25 to 30 KM away from Indian side of the LAC. The troop movement of Chinese military comes at a time when both the countries are in a stand-off along the Line of Actual Control at Pangong Tso and the Galwan river valley. As of now, the Indian and Chinese armies are in talks to address the issue of LAC and sort the differences over the border area in eastern Ladakh.

Earlier on May 4-5, 2020, Indian Army and Chinese People’s Liberation Army (PLA) were seen in a face-off near near Pangong Tso, Ladakh, around 170 km from Leh. Additionally, the Chinese PLA troops completed the construction of a 3 km long road on the north bank of Pangong Tso lake from Finger 5 to Finger 8.

Why China's construction of road near Pangong Tso is a matter of concern?

The Chinese army has just winded up with the extension of road near Pangong Tso lake in just a period of two weeks in the similar manner when it extended the road over LAC to Tawang in October 1962 in just two weeks after capturing the border.

What is the status of Indian Army at the LAC?

The Darbuk-Shyok-Daulat Beg Oldi (DSDBO) road is strategically important for India. In order to contain the threat from Ladakh's Galwan valley, Indian troops have been positioned to block further movement of China's PLA toward India. However, there is no deployment of any Indian Tanks.

What is LAC & its full form?

The LAC stands for Line of Actual Control (LAC). It is the border demarcation line that separates the territories controlled by India & China.

Where is the LAC located?

The LAC is located in three difference sectors:

Why LAC is a disputed area between India & China?

For India, the LAC is 3,488 km long, however for China, it is just 2,000 km long. India has been building its territory over the LAC considering its 3488 km length. China has been demanding a freeze on such construction activities and infrastructural development by India. The major disagreements between India and China are over the LAC at the Eastern (Arunachal Pradesh and Sikkim) & Western sectors (Ladakh). There is no clarification on the LAC boundary.

Agreements on LAC between India & China

Is there a map of the LAC?

Both the sides have shared & exchanged their maps of the Middle sector LAC - Uttarakhand and Himachal Pradesh. However, there is no exchange of maps on western sector.

What is difference between the LAC & LOC?

The LAC is the Line of Actual Control between India & China and as of now there is no clarity over the line, there is no agreement over it by both countries and neither it appears on the map.

On the other hand, the Line of Control (LOC) is between India & Pakistan. The LOC is located on the map of both the countries and is backed by the Shimla Agreement.