The cleanup system, “System 001”, headed to a location 240 nautical miles offshore for a two-week trial before moving towards the Great Pacific Garbage Patch, a collection of marine debris in the North Pacific Ocean, to start the cleanup. 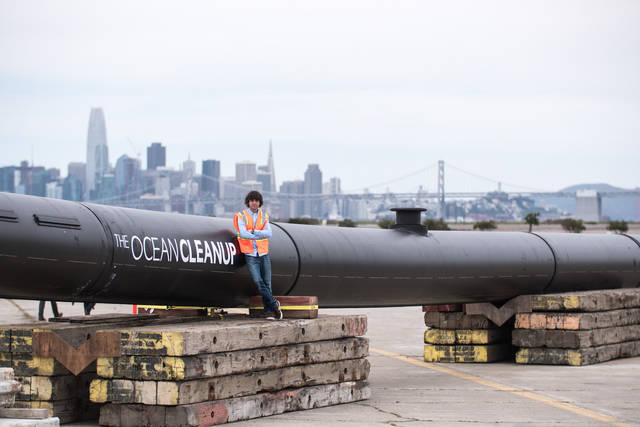 The Ocean Cleanup foundation, an organisation founded by 24-year-old Dutch innovator Boyan Slat, on September 9, 2018 launched the world’s first ocean cleanup array from San Francisco, marking the start of the cleanup of Great Pacific Garbage Patch, a collection of marine debris in the North Pacific Ocean.

System 001 is being towed from the San Francisco Bay by the vessel Maersk Launcher.

• The hard-walled pipe enables the floating component of the array.

• It consists of a 2000 ft long U-shaped floating barrier with a three-meter (10 ft) skirt attached below.

• This dense 10-foot skirt below the floating part of the device is supposed to help gather floating debris.

• The system is designed to be propelled by wind and waves, allowing it to passively catch and concentrate plastic debris in front of it.

• The system is fitted with sensors and cameras to help the team in monitoring its performance and make improvements for future deployments.

• The system receives the power through the solar panels.

• Dutch inventor Boyan Slat founded ‘The Ocean Cleanup’ in 2013 at the age of 18 in Delft, the Netherlands.

• Headquartered at Rotterdam, the Netherlands, the Ocean Cleanup is a non-profit organization, developing advanced technologies to free the world’s oceans of plastic.

• The organisation targets to clean up half the Great Pacific Garbage Patch in 5 years’ time.

• As per the plans of the organisation, the concentrated plastic will be brought back to shore for recycling and will be sold to companies. The revenue gained will help fund the cleanup expansion.

• The Ocean Cleanup's team consists of more than 70 engineers, researchers, scientists and computational modelers working daily to rid the world's oceans of plastic.