As per the reports, the largest hole in the Ozone layer which was 1 million square kilometres wide over the Arctic is now closed.

The hole in the Ozone layer was first identified by the scientists this year in March which was caused due to the unusual atmospheric conditions.

The news was confirmed by Copernicus Atmosphere Monitoring Service (CAMS) and The Copernicus Climate Change Service (C3S) by the European Centre For Medium-Range Weather Forecasts (ECWMF).

The European Satellite Monitoring Agency announced the development through their twitter handle stating that the 2020 Northern Hemisphere Ozone hole has come to an end. 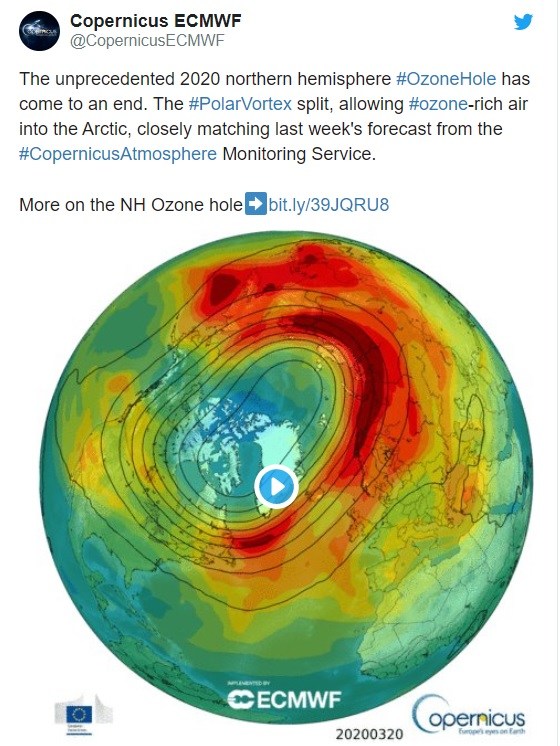 Reason for the closing of Ozone Layer Hole:

As per the reports by the scientists, the reason for the healing of a 1-million square kilometer wide hole in the ozone layer is the polar vortex. It is a high-altitude current that is responsible for bringing cold air to the polar regions.

The report also added that the closing of the hole in the Ozone layer is not due to the reduced level of pollution during COVID-19 lockdown.

The signs of a hole forming in the Ozone layer above the North Pole were noticed in March by the scientists. It was thought that it was the result of low temperature. It was projected that the largest hole in the Ozone layer would have led to a bigger threat, had it been moved to the south.

The ozone layer in the Earth’s stratosphere absorbs the sun’s ultraviolet rays and shields the planet from the harmful radiation that can cause skin cancer. Scientists discovered in the 1970s that the Ozone layer has been depleted due to the harmful man-made activities which were resulting in a threat to human life on Earth.