The bridge will enhance defence logistics along the China border; it will enable the military to speed up the dispatch of forces to Arunachal Pradesh, which borders China. India and China share around 4000-kilometre-long border, with almost 75 percent in Arunachal Pradesh.

This 4.94 kilometre long bridge over the Brahmaputra river took nearly two decades and over Rs 5900 crore to get completed.

The bridge was inaugurated on the birth anniversary of former PM Atal Bihari Vajpayee, under whose government the work for the bridge began in 2002.

• Located just over 20 kilometres from the Assam-Arunachal Pradesh border, the Bogibeel Bridge will connect the south bank of the Brahmaputra river in Assam's Dibrugarh district with Silapathar in Dhemaji district, bordering Arunachal Pradesh, making travel to Pasighat easier.

• The bridge includes the main bridge, dykes on the north and south banks, road network of 30 kilometres, rail network of 74 kilometres and six new railway stations.

• The double-decker Bogibeel bridge has two railway lines on the lower deck and a three-lane road on the upper deck.

• The bridge is 32 metres above the water level of the Brahmaputra and is designed as the bridge linking Sweden and Denmark.

• It can bear the weight of India's heaviest 60 tonne battle tanks and so that fighter jets can land on it.

• The Bridge will have a serviceable period of around 120 years.

• It is India’s only fully welded bridge for which European welding standards were adhered to. It is Asia’s second longest rail-cum-road bridge.

• The superstructure of the bridge was built by the joint venture of Hindustan Construction Company, Germany-based DSD Brouckenbau and VNR Infrastructure.

• The Prime Minister also flagged off the Tinsukia-Naharlagun Intercity Express. The train will run five days a week.

• The rail journey from Dibrugarh to the Arunachal Pradesh capital Itanagar will now be cut by 750 kilometres.

• The rail line will be linked to Chowalkhowa, which is 5.83 kilometres from Dibrugarh, on the south bank and between Sisi Borgaon and Sirpani on the north bank.

• The work on the railway line is being undertaken by Northeast Frontier Railway. 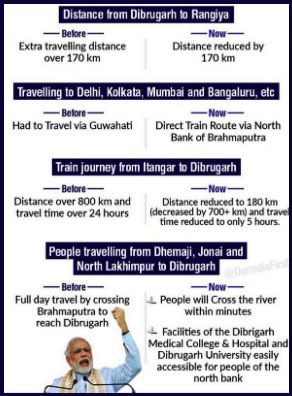 • While the journey from Dibrugarh to Delhi currently takes more than 37 hours, the new bridge is likely to reduce the commute by three hours.

• It will reduce travel time from Assam to Arunachal Pradesh to 4 hours (minus the 170-km detour via Tinsukia).

• It will also reduce the distance to the North East by 165 km, saving fuel worth Rs 10 lakh per day in the region.

The Steel Authority of India Limited (SAIL) supplied around 35400 metric tonnes of steel for the construction of Bogibeel Road-cum-Rail Bridge on the river Brahmaputra. This quantity is little more than 50 percent of the total quantity of steel supplied for the bridge.