Rafael Nadal beat Nick Kyrgios of Australia in straight sets of 6-2, 6-1 in the China Open final to win his sixth ATP title of 2017. This is his 75th career singles trophy. The last time he won at least six titles in a year was in 2013 when he captured 10 trophies for the season. 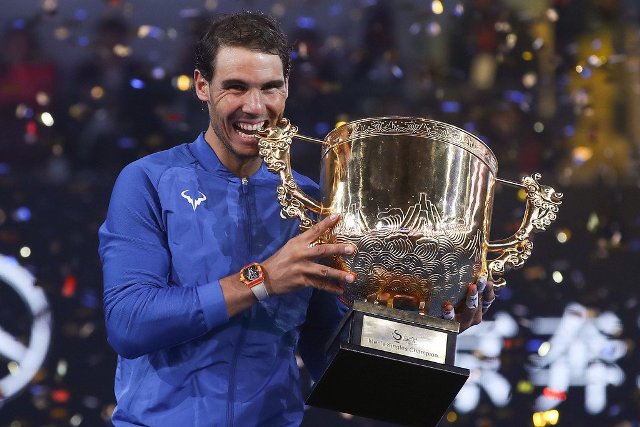 In the women’s event, France’s Caroline Garcia also defeated world no.1 Simona Halep from Romania in straight sets of 6-4, 7-6 (3).

Top-ranked Nadal, who was tied with Roger Federer and Alexander Zverev at five titles this season, surpassed them with the win in Beijing. This is his 75th career singles trophy.

Garcia on the other hand, who had lost to Halep previous two times they played against each other, won her second consecutive WTA title. With this win, she has now climbed up 6 spots from the 15th rank to the 9th in the latest WTA singles rankings list, making her debut entry in the top-10.

The 31-year-old’s six trophies this year include a record 10th title at the French Open and a third at the U.S. Open. The last time he won at least six titles in a year was in 2013 when he captured 10 trophies for the season.

Key Highlights of the match

• Australia’s Kyrgios was struggling with his nerve right from when the match began and he never managed to regain a confident range.

• In contrast, Nadal always looked in charge and saved all four break points he faced.

• Kyrgios was angered by a line call in the first set and his complaints eventually cost him a penalty point at the start of the eighth game.

• Kyrgios didn’t make it onto the board in the second set until he was serving with Nadal already leading 5-0.