Smriti Mandhana has been named as Best player of the year, ODI Player of the Year and included in ICC Women's Team of the Year 2018. The cricketer had played a crucial role in India’s semi-final appearance at the ICC Women’s World T20 in the West Indies.

• Smriti Mandhana has become the second Indian woman player to win an ICC award after fast bowler Jhulan Goswami, who was named the ICC Women’s Player of the Year in 2007.

• Australia’s opening batter and wicketkeeper Alyssa Healy, who finished with 225 runs in six matches at the ICC Women’s World T20 2018 in the West Indies, has been named the ICC Women’s T20I Player of the Year.

• England’s 19-year-old left-arm spinner Sophie Ecclestone has been voted the ICC Women’s Emerging Player of the Year after she grabbed 18 wickets in nine ODIs and 17 in 14 T20Is during the calendar year.

• The ICC Fans’ Moment of the Year award, which will be chosen by cricket fans around the world who will get a chance to vote for their favourite moment of 2018, will be announced next month.

• The 22-year-old made her Test debut in August 2014 against England at Wormsley Park. She helped her team win the match by scoring 22 and 51 in her first and second innings, respectively and in the latter innings, she shared in an opening-wicket partnership of 76 runs with Thirush Kamini, chasing 182.

• She scored her maiden international hundred, 102 off 109 balls, in the second ODI game of India's tour of Australia in 2016 at the Bellerive Oval in Hobart, which India lost.

• She was the only Indian player to be named in the ICC Women's Team of the Year 2016.

• Mandhana came into the team for the 2017 World Cup after recovering from an injury she sustained, an anterior cruciate ligament rupture.

• She began the World Cup with a 90 against England in Derby, in the first of the group matches. She helped her team win by 35 runs and was named the player of the match.

• This was followed by her second hundred in a One Day International against West Indies,106 not out.

• Mandhana was part of the Indian team to reach the final of the 2017 Women's Cricket World Cup where the team lost to England by nine runs. 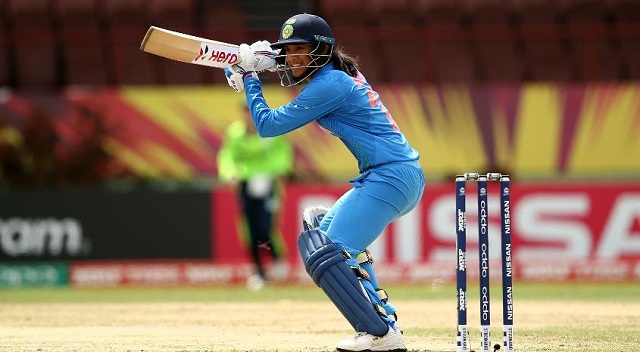 • In March 2018, she scored the fastest fifty for India in a Women's Twenty20 International (WT20I) fixture, taking 30 balls to reach a half-century against Australia women in the 2017–18 India women's Tri-Nation Series.

• The following month, she was named the player of the series, for the three WODI matches played against England women.

• During the tournament, she became the third cricketer for India to score 1,000 runs in WT20I matches.