President of United States, Donald Trump has issued a new executive order ending the 120-day temporary ban imposed on the US refugee programme. The administration has however called for an additional 90-day review of the program for 11 countries identified as “high risk”. 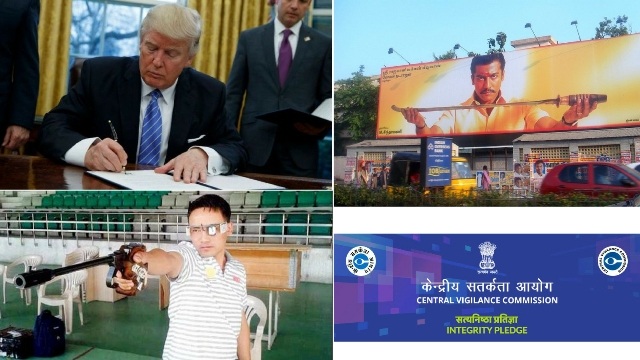 The Union Ministries of Power  and Textiles on 24 October 2017 jointly launched an initiative 'SAATHI' (Sustainable and Accelerated Adoption of efficient Textile technologies to Help small Industries).

Under this initiative, Energy Efficiency Services Limited (EESL), a public sector entity under the Union Ministry of Power, will acquire energy efficient Powerlooms, motors and Rapier kits in bulk and provide them to the small and medium Powerloom units.

The administration has however called for an additional 90-day review of the program for 11 countries identified as “high risk”, most of which are situated in the Middle East and Africa.

Trump had previously suspended the processing of all refugees to the US for a period of 120 days as part of a previous executive order, which was issued along with the travel ban on several Muslim-majority countries.

The Madras High Court on 24 October 2017 banned the use of photographs or pictures of living persons on banners, flex boards and sign-boards across the state of Tamil Nadu.

The Central Vigilance Commission (CVC) will rank and give a score to the central government organisations on anti- corruption measures being taken by them.

Both Rai and Sidhu picked up their third gold together in the mixed team event, officially for the first time at an ISSF World Cup. French pair of Florian Fouquet and Celine Goberville was awarded the silver medal and China's Xiaoxue Cai and Wei Yang settled for the bronze.