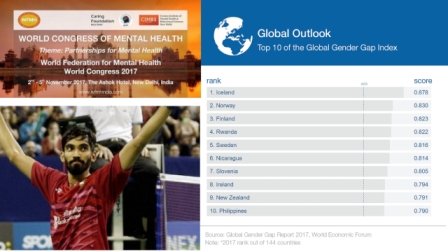 The World Economic Forum (WEF) on 2 November 2017 released the Global Gender Gap Report 2017. The report catalogues 144 countries on the basis of their progress towards gender parity and then lists them accordingly in its Global Gender Gap Index.

This year, the Global Gender Gap Index 2017 is topped by Iceland, while India fetched 108th rank, slipped 21 places in comparison with its 87th rank in 2016.

'Fake news' named Word of the Year 2017 by Collins Dictionary

The Collins Dictionary on 2 November 2017 named 'Fake news' as the Word of the Year 2017 due to its widespread use around the world. The term 'Fake news' was popularised by US President Donald Trump.

The term 'Fake news' is defined as 'false, often sensational, information disseminated under the guise of news reporting'.

'Fake news' takes over the term 'Brexit' which was named as the definitive word in 2016 after the June 2016 referendum in favour of the UK’s exit from the EU.

The 25-year-old grabbed the spot after jumping two places in the latest BWF rankings. He was previously placed 4th behind Korea’s Son Wan Ho and China’s Lin Dan, both of whom have slipped down by 1 position.

The second-to-top rank is a result of Srikanth’s sensational run this season. He reached five finals this year, clinching four titles so far. He won back-to-back titles at Indonesia and Australia and then at Denmark and France.

The 21st World Congress of Mental Health was inaugurated by President Ram Nath Kovind in New Delhi on 2 November 2017.

The conference is expected to witness participation from over 300 international delegates, representing around 50 nations from across the world.

Kenneth Juster confirmed as US Ambassador to India

Senior White House official Kenneth Juster was on 27 October 2017 confirmed as the United States (US) Ambassador to India by the US Senate Foreign Relations Committee through a voice vote.

Juster will succeed Richard Verma, the first Indian-American to head this position. Verma resigned from the post on 20 January 2017 with the swearing in of Donald Trump as the 45th President of the United States.

Juster was also one of the key architects of the ‘Next Steps in Strategic Partnership’ initiative that formed the foundation for the landmark civil nuclear agreement between the two countries in 2008.