Academy Awards 2021: Highlights and the complete list of winners

The 93rd Academy Awards held on 25 April 2021 honoured the best films of 2020 and early 2021. The nominations were announced on 15 March 2021 but the event was held two months later than originally planned. 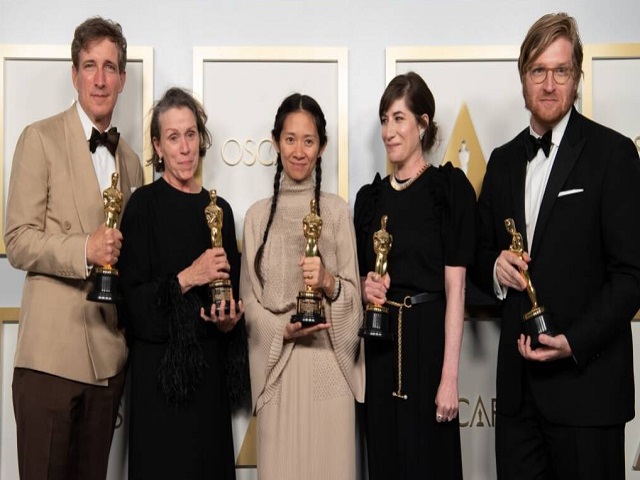 The Academy Awards, also known as the Oscars, are the most coveted and prestigious awards in the entertainment industry across the globe. They are presented annually by the Academy of Motion Picture Arts and Sciences (AMPAS) and the winners of various categories are awarded a copy of a golden statuette as a trophy, officially known as 'the Academy Award of Merit'.

The 93rd Academy Awards or Oscars 2021, held on 25 April 2021, honoured the best films of 2020 and early 2021. For the first time in history, the awards were held virtually and in-person at Union Station and the Dolby Theatre in Los Angeles, California, U. S. due to the ongoing COVID-19 pandemic. The nominations were announced on 15 March 2021 but the event was held two months later than originally planned (28 February 2021).

3- Frances McDormand became the seventh person to win a third acting Oscar for her Best Actress win for Nomadland.

4- Chloé Zhao become the first woman of colour to be awarded best director for Nomadland, and the second woman after Kathryn Bigelow.

5- Jean Hersholt Humanitarian Award was presented to Tyler Perry (for his philanthropic and charitable endeavours in recent years), and Motion Picture and Television Fund (for the emotional and financial relief services it provides to the members of the entertainment industry)

6- The annual Governors Awards were cancelled by the Academy in the wake of the COVID-19 pandemic and the winners were incorporated into the Oscar ceremony. For the first time, there were no official winners of the Academy Honorary Award.

The 93rd Academy Awards paid tribute to the below-mentioned personalities in its In-Memorium Segment.

This was the complete list of winners for Oscars 2021. The students appearing in various competitive examinations are advised to go through the list thoroughly.