What is the difference between BECA, LEMOA and COMCASA?

The third edition of 2+2 ministerial dialogue will be held in New Delhi on 26-27 October. BECA and MISTA agreements will be signed in the meeting. Also, the article will tell you the differences between BECA, LEMOA and COMCASA (the latter two have already been signed). 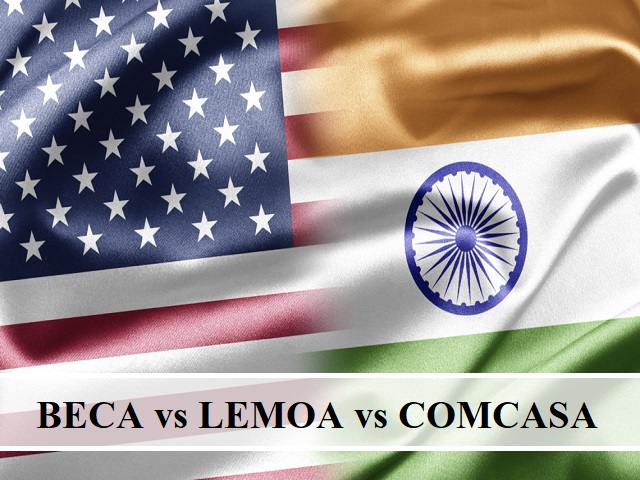 India and the US ministerial meeting

India and the US are preparing for the third edition of 2+2 ministerial dialogue in New Delhi. For this, US Secretary of State Michael Pompeo and Secretary of Defense Mark T Esper will be visiting India and will have day-long in-person meetings with their Indian counterparts External Affairs S Jaishankar and Defence Minister Rajnath Singh on October 26- 27.

As per a statement released by the Ministry of External Affairs, the agenda for the third dialogue will cover all bilateral, regional and global issues of mutual interests.

1- The agenda for this year's 2+2 meeting will be BECA (Basic Exchange and Cooperation Agreement). The pact has deep military implications.

2- MISTA or the Marine Information Sharing Technical Arrangement will also be signed.

The signing of the Basic Exchange and Cooperation Agreement (BECA) will enable both the countries to share geospatial information on maps and satellites for defence purposes. Geospatial information is required while sailing a ship, flying an aircraft, fighting wars, locating targets, etc.

How will it benefit India?

1- The agreement will allow India to use the United State's advanced network of geospatial information.

2- It will also enhance the accuracy of automated systems and weapons like missiles, armed drones, etc.

3- Navigation and targeting can be enhanced with the help of topographical and aeronautical data.

4- With the signing of this agreement, the Indian military will have a high-quality GPS system to navigate and missiles with real-time intelligence will hit the target with pin-point accuracy.

The LEMOA or the Logistics Exchange Memorandum of Agreement is one of the three foundational agreements between India and the US. It was signed between the two countries in August 2016 after a decade long negotiation. It is the Indian specific version of the Logistics Support Agreement (LSA).  The agreement facilitates the military of both countries to use each other's bases for refuelling and replenishment purposes.

This doesn't mean that U.S. troops will be stationed in India or vice versa. The agreement is purely logistical.  The agreement is useful for Navy-to-Navy Cooperation between the two countries and allows India to use the string of U.S. facilities across the globe for logistical support. Similarly, the US also can benefit from Indian facilities.

The agreement facilitates India to use the United States' encrypted communications equipment and systems. Indian and the US military commanders, aircraft and ships can communicate through secure networks in peace and war.

In addition to the above, it also paved way for the transfer of communication security equipment from the US to India to facilitate interoperability.

What do the three agreements signify?

1- The LEMOA states that the one partner trusts the other and can expose its valuable assets.

2- The COMCASA states that one partner is confident enough that it can completely rely on the encrypted systems provided by the other to connect militaries of both the countries.

3- The third agreement, BECA, means that highly classified information can be shared between the two countries in real-time without the fear of data being compromised.

What is the India-US currency swap agreement?