Ratio and Proportion: Formulas and Shortcuts

Learn shortcut methods of calculating Ratio and proportion which is one of the easiest concepts from competitive exam perspective. Questions from this concept are mostly asked in conjunction with other concepts like Mixtures and Alligations. Here, you will get to know the shortcuts and formulae to solve these questions quickly and with accuracy.

Ratio and Proportion is one of the easiest concepts from competitive exam perspective. Questions from this concept are mostly asked in conjunction with other concepts like ‘Mixtures & Alligations’. 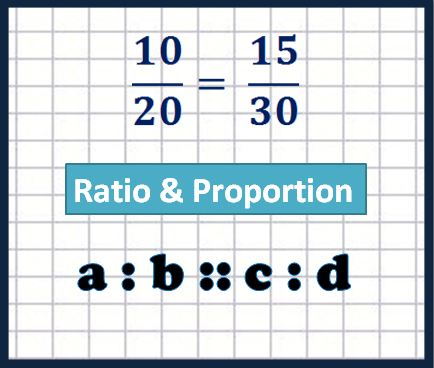 Learn the formulas and shortcuts of Mixture and Alligation

and is written as

If both antecedent and consequent are multiplied or divided by the same number the ratio remains unchanged.

Ratio of two fractions can be expressed in fraction as follows:

Ifa/A, b/B, c/C are unequal fractions then their ratio

lies between the lowest and highest fraction.

If two different numbers (c and d) are to be added to the antecedent (a) and consequent (b), then it must be satisfy the following condition:

and if 3 and 5 are to be added to the numerator and denominator respectively, then it follows as:

Where a and d are called extremes and b and c are called the mean of the ratio.

The mean proportion of a and b is

Product of extremes is equal to the product of means.