Copernicus Sentinel-6 Michael Freilich Satellite: All you need to know about the Jason-CS mission

The Jason Continuity of Service or Jason-CS mission is an international partnership between the United States and Europe on the Sentinel-6 satellite to monitor oceans.

On 21 November 2020, Sentinel-6 Michael Freilich satellite, designed to monitor oceans was launched from the Vandenberg Air Force base in California aboard a SpaceX Falcon 9 rocket.

Spacecraft separation. "There goes Sentinel-6! That is a beautiful sight."#SeeingTheSeas pic.twitter.com/iDhRzK2s0J

Since 1992, high-precision satellite altimeters have helped scientists in getting a better understanding of how the ocean stores and redistributes heat, water, and carbon in the climate system.

The Sentinel-6 satellite will extend this legacy up till 2030 and will provide a record of around 40 years of sea-level rise along with the changes in the ocean currents and conditions.

1- Jason-CS mission: The Jason Continuity of Service or Jason-CS mission is an international partnership between the United States and Europe on the Sentinel-6 satellite to monitor oceans.

2- Naming of Satellite A: Jason-CS mission includes two identical satellites (Satellite A and Satellite B) scheduled in 2020 and 2025 respectively.

In February 2020, Satellite A was renamed as Sentinel-6 Michael Freilich in the honor of Dr. Michael Freilich, Director of NASA’s Earth Science Division (2006-2019), who passed away in August 2020.

(a) The Sentinel-6 is designed to measure the height of the ocean, which is a key component in understanding how the climate of Earth is changing. For this, the satellite will send pulses to the surface of the Earth and will measure the time taken by it to return. Also, with the help of GPS and ground-based lasers, the satellite will measure water vapour along this path and will find its position.

(b) The Copernicus Sentinel-6 Michael Freilich satellite will ensure the continuity of sea-level observations into the fourth decade and will provide measurements of global sea-level rise which is one of the most important indicators of human-caused climate change.

(c) The accumulated data will help in improving short-term (for weather predictions) as well as long-term forecasting (for predicting seasonal conditions). 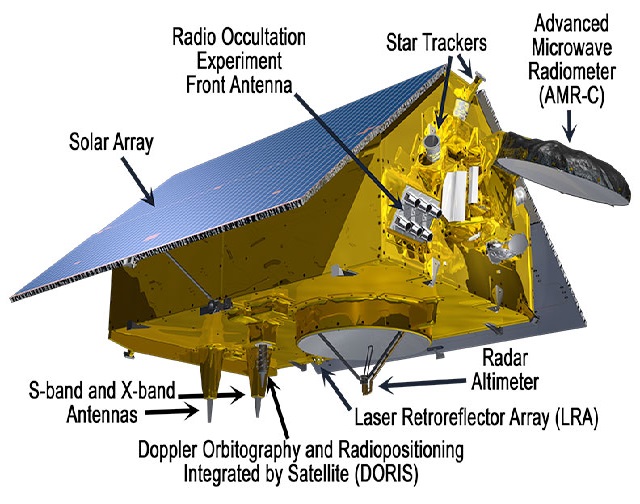 1- Radar altimeter: It is developed by ESA and is based on the Sentinel-3 SARL instrument.

2- Advanced Microwave Radiometer (AMR-C): It is provided by NASA.

3- GNSS Precise Orbit Determination (POD) Receiver: It is developed by ESA and is derived from the GNSS Receiver on Sentinel-3.

4- Doppler Orbitography and Radiopositioning Integrated by Satellite (DORIS Receiver): It is identical to the one used on Jason-3 and Sentinel-3.

5- Laser Reflector Array (LRA): It is identical to the one used on Jason-3 and is provided by NASA.

6- GNSS-RO: It is provided by NASA for Radio Occultation and is based on a Tri-G receiver.

15 Unknown and Interesting facts about NASA