What is in the Union Budget 2019 for Electric Vehicles?

As we know that the Finance Minister Nirmala Sitharaman has presented the Union Budget 2019 in the Parliament. She told in her speech that the Indian government continued to focus on promoting electric mobility in the country. Do you know about electric Vehicles and under which scheme electric vehicles are encouraged? What is in 2019 Union Budget about electric vehicles? Let us find out! 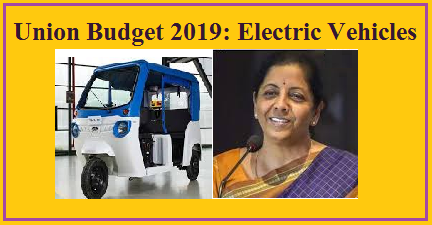 Electric Vehicles (EVs) are also known as battery electric vehicles or BEVs. EVs wheels are turned by electric motors rather than by a gasoline-powered drivetrain. They are environment friendly due to zero emissions of pollutants.

What is in the Union Budget 2019 for Electric Vehicles (EVs)?

To make Electric Vehicles (EVs) affordable for the consumers, government will provide additional income tax deduction of Rs 1.5 lakhs on the interest paid on the loans taken to purchase EVs. Therefore, according to Finance Minister, people will receive an overall benefit worth ₹2.5 lakh on buying EVs. The benefit include discount on the loan along with other tax benefits offered over the loan tenure.

Nirmala Sitharaman on 5 July, 2019, in the parliament announced the reduction of GST on electric vehicles from 12% to 5%. No doubt this is a big boost for electronic vehicles. This will help to cut down the upfront cost of purchasing an electric vehicle in India, thus making it viable alternative to vehicles propelled by internal combustion engines (ICE).

The budget of 2019 also offers relief to lithium-ion electric battery manufacturers. This has been done to reduce the cost of EV batteries. As one of the significant maintenance cost associated with electric vehicles is the replacement of depleted batteries. If battery costs will be reduced, it will encourage people to embrace electric vehicles.

Under which scheme of the government electric vehicles are encouraged?

FAME II scheme of the government aims to encourage faster adoption of electric vehicles by right incentives and charging infra.

- The government will offer the incentives for electric buses, three-wheelers and four-wheelers to be used for commercial purposes.

- Other things that are included in the scheme are: Plug-in hybrid vehicles, sizeable lithium-ion battery and electric motor. Depending upon the size of the battery, fiscal support will also be offered.

Thomas Davenport in 1834 build the first practical Electric Vehicle which was quickly followed by a two-passenger electric car in 1847 and then an electric car that could go 20mph in 1851. In 1900, Edison invented cell, a nickel-iron battery which was a key factor in the development of early twentieth century electric vehicles. In 1960s, automakers started working on electric vehicle batteries again as an offshoot of the U.S. Space programs. Till 1970, electric vehicles become automobiles capable of driving between 70-300 mi (113–160 km) before recharging. However by 2006, several manufacturers shifted their attention to hybrid electric and fuel-cell electric vehicles that produce power onboard by running an efficient gasoline engine or fuel cell.

Include energy storage cells, a power controller and motors. In an electrical form, transmission of energy eliminates the need for a mechanical drivetrain. A special braking design which is known as regenerative braking uses the motor as generator. Each time the brakes are used, this system feeds energy back to the storage system.

- The electric motor is directly connected to the wheels, so it consumes no energy while the car is at rest or coasting.

- Benefit of regenerative braking system is that it can return as much as hakf an electric vehicle's kinetic energy to the storage cells.

- More than 90% of the energy motor converts in its storage cells to motive force.

- No doubt Electric Vehicles don't cause environment pollution whether they have a limited range.

So, this is all about the Electric Vehicle and to promote Electric vehicles in the country, Union Budget 2019 came up with new benefits.

Union Budget 2019: Income Tax Return can be filed by Aadhar Card only