The Reserve Bank of India (RBI) has the responsibility of printing currency notes in India. RBI prints the notes of all denomination except 1 rupee note because it is printed by the Ministry of Finance. Except one rupee note every currency note of India has the declaration of the RBI governor; “I Promise to pay the bearer sum of 100 Rupees”. Its simple meaning is; if somebody held a note of 100 rupee then it is the liability of the RBI to pay the bearer goods/gold of 100 rupee at any cost. 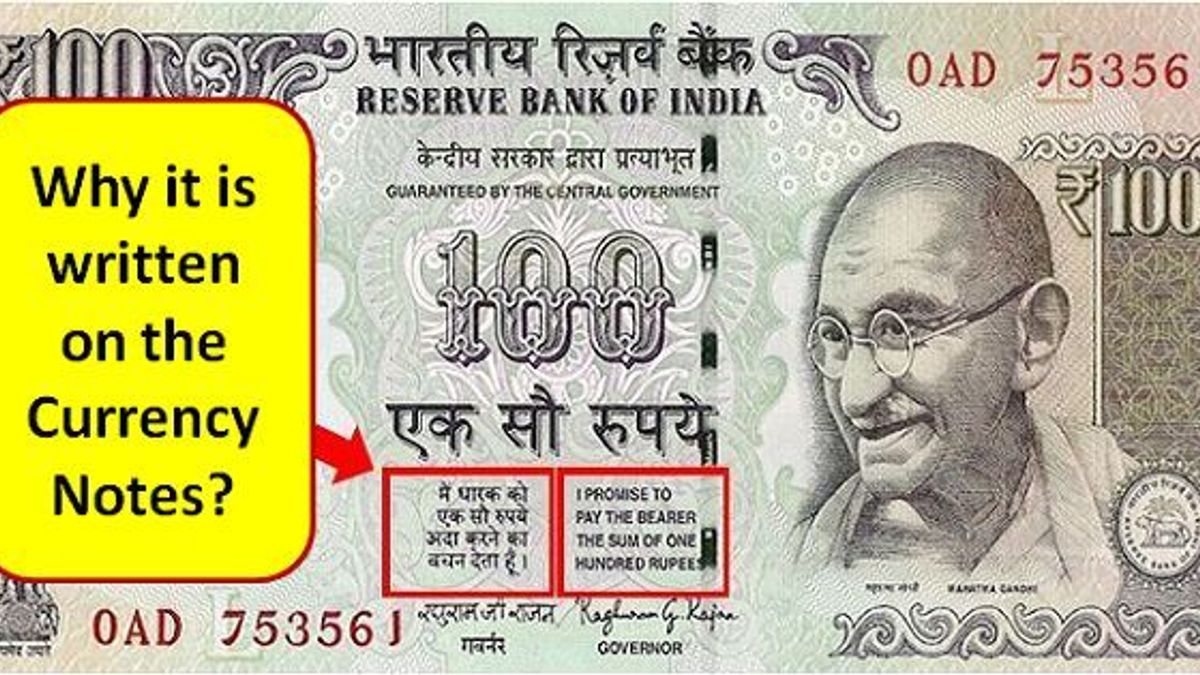 I Promise to pay the bearer sum of 100 Rupees:Meaning

How much Currency notes can be printed by the RBI?

Printing of currency notes in India is done on the basis of Minimum Reserve System (MRS). This system is applicable in India since 1957. According to this system, the Reserve Bank of India has to maintain assets of at least 200 crore rupees all the times. Out of this 200 crore, the 115 cr rupee should in the form of Gold and rest 85 cr. should be in the form of foreign currency.

After holding this much assets, the RBI can print any number of currency notes as per the requirement of the economy. Although it has to take prior permission from the government.

“I Promise to pay the bearer the sum of rupees” what does it mean?

I Promise to pay....is printed on the currency note just to ensure that the RBI has reserved the gold equal to the value of printed currency. This promissory note ensures to the note holder that the RBI can’t be defaulter in any case/situation (Civil war, world war or any natural calamity, depression or hyperinflation inflation etc). If somebody holds 100 rupee currency note then he/she need not to worry about its exchange value because in any situation the RBI is liable to pay him gold/goods equal to the value of the 100 rupee.

Why “I Promise to pay”.... is written on the Currency Notes:

1. To increase the faith of the Indian currency holder (Indian or foreigner) in the currency of the country. For foreign holders, RBI maintains foreign currency worth 85 cr.

3. The “Promissory Note” written on the note is the unconditional promise in writing by the Central Bank of the country that it is liable to pay the written amount to the currency holder.

4. If the declaration or “Promissory Note” of the RBI Governor is not written on the currency then the foreign people may hesitate in accepting the note because they may not be sure about the exchange value of the currency note in the future.

So a promissory note is a negotiable instrument, wherein one party (the maker or issuer) makes an unconditional promise in writing to pay a determinate sum of money to the other (the payee), either at a fixed or determinable future time or on demand of the payee.

The promissory note under the sing of the RBI governor makes a currency legal tender, so any citizen of India can’t deny to accept this money because doing so a like rejecting the order of the RBI supported by the Government. If anybody does so he/she is liable to face action as per the concerned laws (may face sedition charges).

So in the end, we hope that you must understand the meaning of promissory note or declaration of the RBI governor on the Indian currency notes.