The key notes of the chapter are given below

Bandwidth refers to the frequency range over which an equipment operates or the portion of the spectrum occupied by the signal. Different types of signals (music, picture or computer data) require different bandwidth.

To transmit music signal an approximate bandwidth of 20 kHz is required because of the high frequencies produced by the musical instruments. The audible range of frequencies extends from 20 Hz to 20 kHz.

Video signals for transmission of pictures require about 4.2 MHz of bandwidth.

A TV signal contains both voice and picture and is usually allocated 6 MHz of bandwidth for transmission.

Coaxial cable offers a bandwidth of approximately 750 MHz. Such cables are normally operated below 18 GHz.

Communication through free space using radio waves takes place over a very wide range of frequencies: from a few hundreds of kHz to a few GHz.

Range of frequencies used for different services are given below 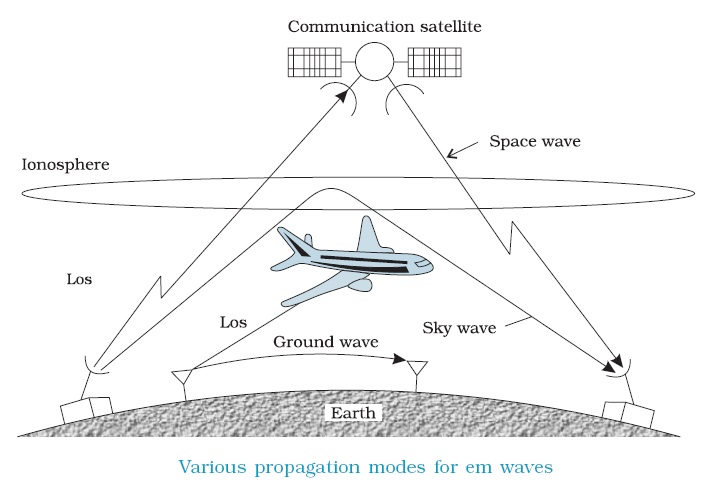 Radiowaves traveling through atmosphere and moving along the surface of the earth are termed as ground waves.

To radiate signals with high efficiency, the antennas should have a size comparable to the wavelength λ of the signal (at least ~ λ/4). At 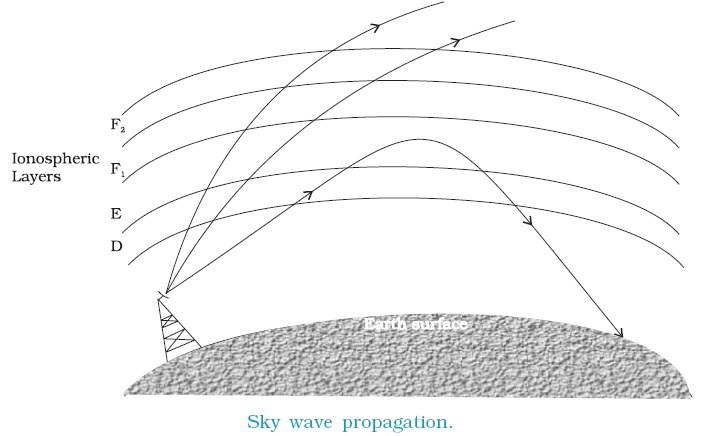 The frequency range from a few MHz up to 30 to 40 MHz, long distance communication can be achieved by ionospheric reflection of radio waves back towards the earth.

This mode of propagation is called sky wave propagation and is used by short wave broadcast services.

The ionosphere is further subdivided into several layers as given below in table: 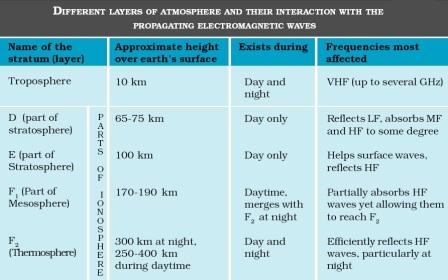 The phenomenon of bending of em waves so that they are diverted towards the earth is similar to total internal reflection in optics.

Television broadcast, microwave links and satellite communication are some examples of communication systems that use space wave mode of propagation.

A space wave travels in a straight line from transmitting antenna to the receiving antenna.

At frequencies above 40 MHz, communication is essentially limited to line-of-sight paths.

If the transmitting antenna is at a height hT, then you can show that the distance to the horizon dT is given as dT is given as, dT = (2RhT)1/2, where R is the radius of the earth (approx. 6400 km).

dT is also know as the radio horizon of the transmitting antenna.

From the figure given above, maximum line-of-sight distance dM between the two antennas having heights hT and hR above the earth is given by

Here, hR is the height of receiving antenna.

Space waves are of very high frequency (30 MHz to 300 MHz). Space waves can travel through atmosphere directly from one point to another. Height of the transmission antenna can be calculated from the relation, d = (2hr)1/2