How to prepare trigonometry for NDA exam?

In this article, we will discuss some important tips and tricks to solve trigonometry questions quickly during the NDA exam.

NDA exam is conducted by UPSC (Union Public Service Commission) twice in a year across the nation. After qualifying written exam & SSB interview, candidates are admitted to National Defence Academy, Khadakwasla, Maharashtra. NDA is considered to be the first tri-service academy in the world where cadets opted for the Air Force , Navy, and  Army are trained together for three years and then sent for further training at Air Force Academy, Indian Naval Academy, and Indian Military Academy to become a commissioned officer.

NDA exam is a very prominent exam among the young students, who have recently passed 12th class and aged below 19.5 years. The selection process is comprised of a written test followed by the SSB interview and the written test is conducted in the following two subjects-

In Mathematics, trigonometry is one of the important chapters carrying second highest weightage after Algebra. The questions from trigonometry require rigorous practice and command on concepts to get high marks in this exam because these questions are not very general and straight-forward in nature.  To solve these questions, you must be aware of the right tricks so that maximum questions can be attempted in the given time frame.

In this article, we will discuss some important tips and tricks to solve trigonometry questions quickly during the NDA exam. Let us have a look on them-

Trigonometry is very simple if you study it very well and in a systematic manner. Let us understand the basics of trigonometry one by one as described below-

i. Trigonometric Ratios- These ratios are the foundation of the trigonometry and you must understand them in a very conceptual way. There are 6 ratios in trigonometry namely- sin, cos, tan, cot, sec, and cosec. The method to find them in a right-angled triangle is as follow-

Now, some of you may be thinking, what this table is all about? Let us understand-

cosec A= Hypotenuse/Perpendicular; (Here, A is the notation for representing an angle)

In the same way, you can interpret the other ratios as well.

ii. Trigonometric values- In the following table, we are giving you the values of these trigonometric ratios for some standard angles and their learning shortcuts as well-

These values are of high importance in trigonometry. We have also shared that method of getting these values in the above table. Please remember these values while attempting the questions. 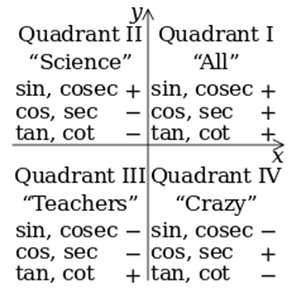 The above figure implies that

a. All trigonometric ratios having angles less than 90 degrees have positive value.

and so on for the further ratios as stated above in this point.

Apart from these concepts, we are sharing some important formulas, which will be helpful during solving the questions- 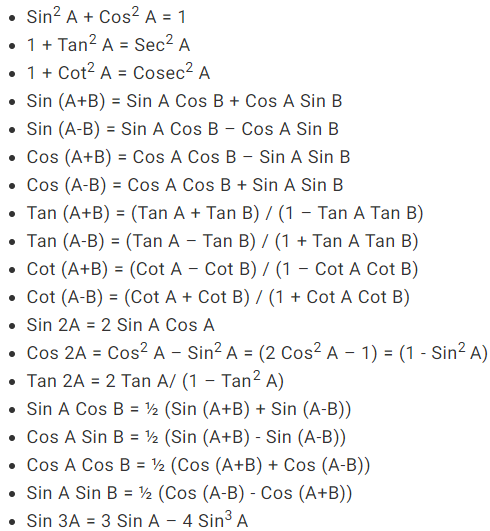 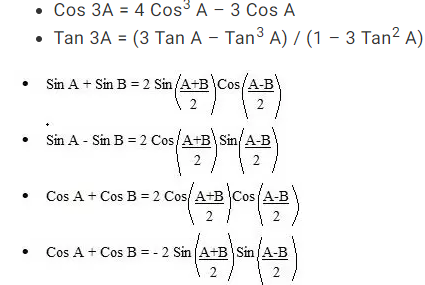 To prepare for the NDA exam, you are advised to refer only those books, which are relevant to the NDA syllabus. NDA exam is a very prestigious exam and every candidate want to qualify it at any cost. Therefore, candidates used to refer too many books to read the same topics or redundant topics. This is again a bad practice in which a lot of time and resources are wasted. Hence, we recommend you to refer only the standard books especially designed for NDA preparation. Few of them are given below-

Previous year question papers also play an important role in cracking the NDA exam. Through solving these papers, you will get an idea about-

- The difficulty level of questions

With the help of previous year question papers, you can set your priorities of studying a particular topic of the trigonometry chapter. Previous year question papers also give you an estimate of the efforts required to gain good marks in these questions as well. Hence, you should attempt these papers time to time and randomly so that you can testify your gained knowledge. There are numerous sources, where you can find the previous year papers. Few of them are given below-

Practicing hard is the key to success in this exam. With practice, you can reduce the chance of getting wrong answers. It also increases your speed & concentration and builds your confidence for the exam. Hence, practice as much as you can, to qualify this exam with flying colors.

If you found the above information on “How to prepare Trigonometry for NDA exam?” useful, then visit our NDA|CDS webpage for more such information.