It is very important for students to get familiar with the latest pattern and difficulty level before appearing for any engineering entrance examination. On the basis of pattern of the practice paper, students can make strategy to attempt the paper.

In this article, the engineering section of Jagranjosh is providing JEE Main Solved Practice Paper to help students in their preparation.

There are three sections in this paper namely Physics, Chemistry and Mathematics. Each section consists of 30 questions. The time allotted to complete the paper is 3 hours.

Here, you will get a set of 30 questions from different topics of Physics like Units and Measurements, Motion in a Straight Line, Laws of Motion, Rotational Motion, Gravitation, Thermodynamics, Kinetic Theory of gases, Waves, Electric Charges and Fields, Electrostatic Potential and Capacitance, Current Electricity, Moving Charges and Magnetism, Magnetism and Matter, Electromagnetic Induction & Alternating Current, Electromagnetic Induction, Alternating Current, Electromagnetic Waves, Dual Nature of Radiation and Matter, Atoms & Nuclei, Semiconductor  Electronics, Communication Systems. For each correct answer you will be award +4 marks and for each incorrect answer one mark will be deducted. Zero mark will be awarded for unattempted questions.

Few sample questions from the Physics practice paper are given below:

In a cyclotron, a charged particle

(a) Undergoes acceleration all the time

(b) Speeds up between the dees because of the magnetic field

(d) Slows down within a dee and speeds up between dees

The charged particle undergoes acceleration as

(ii) speed remain the same inside the dees because of the magnetic field but direction undergoes change continuously.

In a permanent magnet at room temperature,

(a) Magnetic moment of each molecule is zero

(d) Domains are all perfectly aligned

However, they interact with one another in such a way that they spontaneously align themselves in a common direction over a macroscopic volume called domain. Thus, we can say that in a permanent magnet at room temperature, domains are all perfectly aligned.

Mathematics is one of the most scoring subjects among three. For each correct answer +4 marks will be awarded and one mark will be deducted for each incorrect answer. Zero marks will be awarded for any unattempted question. There are 30 questions in this practice paper from different topics like Sets, Relations and Functions, Trigonometric Functions, Complex Numbers and Quadratic Equations, Linear Inequalities, Permutations and Combinations, Binomial Theorem, Sequences and Series, Straight Lines, Conic Sections, Limits and Derivatives, Probability, Inverse Trigonometric Functions, Matrices, Determinants, Continuity and Differentiability, Application of Derivatives, Integrals, Application of Integrals, Differential Equations, Vector Algebra, Three Dimensional Geometry.

Few sample questions from the Mathematics practice paper are given below:

A ladder, 5 m long, standing on a horizontal floor, leans against a vertical wall. If the top of the ladder slides downwards at the rate of 10 cm/s, then the rate at which the angle between the floor and the ladder is decreasing when lower end of ladder is 2 m from the wall is

Let the angle between floor and the ladder be q. 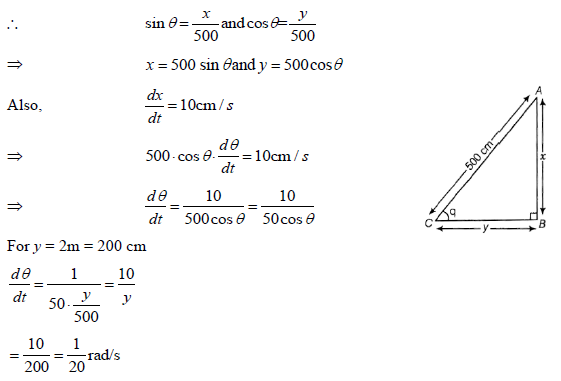 Three dice are thrown at the same time. The probability of getting three two’s, if it is known that the sum of the numbers on the dice was six is

Few sample questions from the Chemistry practice paper are given below:

Which one of the following statements related to lanthanons is incorrect?

(b) The basicity decreases as the ionic radius decreases from Pr to Lu.

(c) All the lanthanons are much reactive than aluminium.

The first few members of the lanthanoid series are quite reactive, almost like calcium. However, with increasing atomic number, their behavior becomes similar to that of aluminium.

Which of the following process is not responsible for the presence of electric charge on the sol particles?

(a) Electron capture by sol particles

(b) Adsorption of ionic species from solution

(i) electrons capture by sol particles during electro dispersion of metal.

After practicing this solved paper, students will have good idea about the different varieties of questions. It will also help students to maintain speed and accuracy in the examination.