Major Landmark Judgements in India important for the IAS Exam 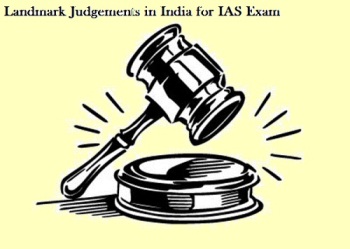 The Judiciary, at one time, was considered and projected to be the weakest branch of the state because it possessed neither power of the purse nor the power of the sword. This myth has been demolished. – Soli Sorabjee.

IAS Preparation involves in-depth study of Indian Constitution and how the legislative, executive and judicial powers are exercised within the framework of Indian administration. The present day Indian constitution is a result of 60 years of active collaboration of the Indian Judiciary and the Parliament. The doctrine of checks and balances is well established in Indian constitution and the same is exercised by the judicial review power of the Supreme Court.

This is a significant decision of the Supreme Court because it represented the first case where the court meaningfully examined and interpreted key fundamental rights enlisted in the constitution including article 19 and 21. The contention was whether, under the writ of habeas corpus and the provisions of the preventive detention act, there was a violation of the fundamental rights entitled in article 13, 19, 21 and 22.

The Supreme Court restricted the scope of fundamental rights by reading them in isolation of article 21 and 22 which provided guidelines for preventive detention. The Supreme Court iterated that the term ‘due process’ prevented the courts from engaging in substantive due process analysis in determining the reasonableness of the level of the process provided by the Legislature.

In this case, the validity of the first constitutional amendment which added Article 31-A and 31-B of the Constitution was challenged. The first time, the question whether fundamental rights can be amended under Article 368 came for consideration of the Supreme Court.

The Supreme Court rejected the contention that in so far as the First Amendment took away or abridged the fundamental rights conferred by Part III it should not be upheld in the light of the provisions of article 13(2).

In this case, conflict arose regarding the power of the parliament to transfer the territory of Berubari to Pakistan.  The detailed examination of article 3 was done by the Supreme Court on a reference made by the President in 1960. The Supreme Court held that the Parliament of India is not competent to make a law under article 3 for the implementation of the Nehru-Noon Agreement.

This was followed by an amendment of the constitution by parliament using the power of Article 368. The result was the Constitution (9th Amendment) Act 1960. The Supreme Court gave a very narrow judgement that the preamble was not an integral part of the constitution and therefore it is not enforceable in a court of law.

I. C. Golaknath case (1967): (Validity of the First and Seventeenth Amendments and described the scope of Article 13)

The validity of the First and Seventeenth Amendments to the Constitution in so far as they affect the fundamental rights was again challenged is this case. The fourth amendment was also challenged.

The Supreme Court adopted a doctrine of prospective overruling under which the three constitutional amendments concerned would continue to be valid. Moreover, the Supreme Court held that article 368 dealt only with the procedure for amendment and an amendment to the Constitution is made as part of the normal legislative process. It is, therefore, a "law" for the purpose of article 13 (2).

To get over the decision of the Supreme Court in Golaknath’s case the Constitution 24th Amendment Act was passed in 1971 in which changes to articles 13 and 368 was made.

The Supreme Court reviewed the decision in Golaknath v. The state of Punjab and considered the validity of the 24th, 25th, 26th and 29th Amendments. The Court held that although no part of the constitution, including fundamental rights, was beyond the amending power of Parliament, the "basic structure of the Constitution could not be abrogated even by a constitutional amendment.

It is a landmark judgement of the Supreme Court of India, and is the basis in Indian law for the exercise of the Indian judicial of the power to judicially review, and strike down amendments to the Constitution of India passed by the Indian Parliament which conflict with the Constitution's basic structure.

The judgment also defined the extent to which the Indian Parliament could restrict the right to property, in pursuit of land reform and the redistribution of large landholdings to cultivators, overruling previous decisions that suggested that the right to property could not be restricted. 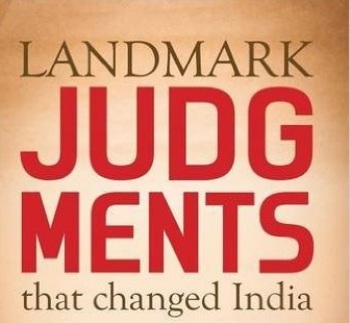 The concept of basic structure was reaffirmed in Indira Nehru Gandhi v. Raj Narayan case. The Supreme Court applied the theory of basic structure and struck down Clause(4) of article 329-A, which was inserted by the 39th Amendment in 1975 on the ground that it was beyond the amending power of the parliament as it destroyed the basic feature of the constitution.

The amendment was made to the jurisdiction of all courts, including the Supreme Court, over disputes relating to elections involving the Prime Minister of India. Some basic features of the Constitution were listed in this case which is considered as unamendable such as sovereign democratic republic status, equality of status and opportunity of an individual, secularism and freedom of conscience and religion and rule of law.

Menaka Gandhi case (1978): (Significant towards the transformation of the judicial review on Article 21)

This case is a landmark judgement which played the most significant role towards the transformation of the judicial view on Article 21 of the Constitution of India so as to imply many more fundamental rights from article 21. A writ petition was filed by Maneka Gandhi under Article 32 of the Constitution in the Supreme Court.

The main issues of this case were whether the right to go abroad is a part of the right to personal liberty under Article 21 and whether the Passport Act prescribes a ‘procedure’ as required by Article 21 before depriving a person of the right guaranteed under the said article.
A new doctrine of a post-decision theory was evolved and the most significant interpretation was made on the interconnections between the three articles 14, 19 and 21.

It was finally held by the court that the right to travel and go outside the country is included in the right to personal liberty guaranteed under Article 21. The Court ruled that the mere existence of an enabling law was not enough to restrain personal liberty. Such a law must also be “just, fair and reasonable”.

Supreme Court in Waman Rao case once again reiterated and applied the doctrine of the basic features of the Constitution. In this case, the implications of the basic structure doctrine for Article31-B were re-examined. The Court drew a line of demarcation on April 24th, 1973 (the date of Kesavananda Bharti’s decision) and held it should not be applied retrospectively to reopen the validity of any amendment to the Constitution, which took place prior to 24-04-1973. It meant all the amendments which added to the Ninth Schedule before that date were valid.

All future amendments were held to be challengeable on the grounds that the Acts and Regulations, which they inserted in the Ninth Schedule, damaged the basic structure. The decision of this case is a landmark one in the constitutional jurisprudence of India. This case has helped in determining a satisfactory method of preserving the settled position and to address grievances pertaining to the violation of fundamental rights.

R. Bommai v. The Union of India raised a serious question of law relating to the Proclamation of President's Rule and dissolution of Legislative assemblies according to Article 356 of the Constitution of India. This verdict stopped the misuse of Article 356 (imposition of the president rule).

“It is emphatically the province and duty of the Judicial Department to say what the law is.” - Marbury

Judicial review is needed to uphold the principle of the supremacy of the Constitution, to maintain federal equilibrium and to protect the fundamental rights of the citizens. India is a synthesis of both, that is, the American principle of judicial supremacy and the British principle of parliamentary supremacy.