In this article you will get CBSE Class 10 Science chapter 13, Magnetic Effects of Electric Current: NCERT Exemplar Problems and Solutions (Part-III). Every question has been provided with a detailed explanation. All the questions given in this article are very important to prepare for CBSE Class 10 Board Exam 2017-2018. 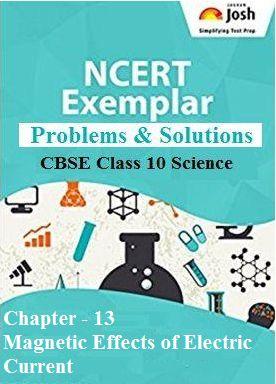 Question 25. Why does a magnetic compass needle pointing north and south in the absence of a nearby magnet get deflected when a bar magnet or a current carrying loop is brought near it? Describe some salient features of magnetic lines of field concept.

The salient features of magnetic field lines are

A labelled circuit diagram due to a current-carrying straight long conducting wire is shown below.

When current is passed through the conductor then concentric magnetic field lines will be produced. The strength of magnetic field keeps on decreasing as we away from the wire.

We use right hand thumb rule to find the direction of magnetic field.

Question 27. Explain with the help of a labelled diagram the distribution of magnetic field due to a current through a circular loop. Why is it that if a current carrying coil has n turns the field produced at any point is n times as large as that produced by a single turn?

Suppose a straight conducting wire is bent in the form of a circular loop and a current is passed through it.

We know that the magnetic field produced by a current-carrying straight wire depends inversely on the distance from it.

Similarly, at every point of a current-carrying circular loop, the concentric circles representing the magnetic field around it would become larger and larger as we move away from the wire as shown in the figure. 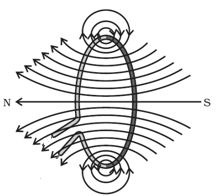 By the time we reach the centre of the circular loop, the arcs of these big circles would appear as straight lines.

Every point on the wire carrying current would give rise to the magnetic field appearing as straight lines at the centre of the loop.

By applying the right-hand thumb rule, it is easy to check that every section of the wire contributes to the magnetic field lines in the same direction within the loop.

Now, the magnetic field produced by a current-carrying wire at a given point depends directly on the current passing through it. Therefore, if there is a circular coil having n turns, the field produced is n times as large as that produced by a single turn. This is because the current in each circular turn has the same direction, and the field due to each turn then just adds up.

The activity is as follows:

Take a small aluminium rod AB. Using two connecting wires suspend it horizontally from a stand, as shown in figure given below. 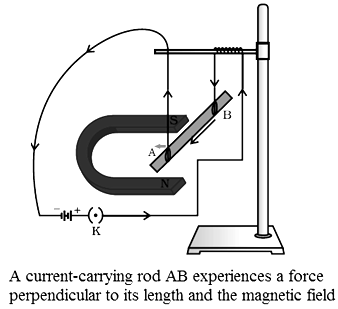 Place a strong horse-shoe magnet in such a way that the rod lies between the two poles with the magnetic field directed upwards. For this put the North Pole of the magnet vertically below and South Pole vertically above the aluminium rod.

Connect the aluminium rod in series with a battery, a key and a rheostat.

Now pass a current through the aluminium rod from end B to end A.

It is observed that the rod is displaced towards the left and rod gets displaced. 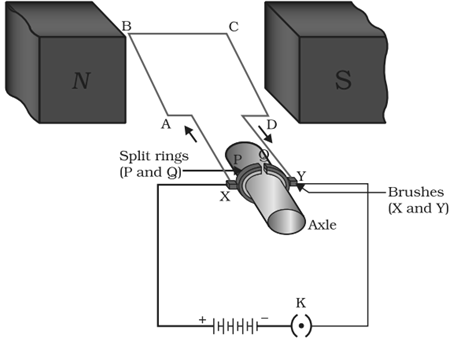 An electric motor consists of a rectangular coil ABCD of insulated copper wire. The coil is placed between the two poles of a magnetic field such that the arm AB and CD are perpendicular to the direction of the magnetic field. The ends of the coil are connected to the two halves P and Q of a split ring. The inner sides of these halves are insulated and attached to an axle. The external conducting edges of P and Q touch two conducting stationary brushes X and Y, respectively, as shown in the figure.

Now the current in arm AB of the coil flows from A to B. In arm CD it flows from C to D, that is, opposite to the direction of current through arm AB.

On applying Fleming’s left-hand rule for the direction of the force on a current-carrying conductor in a magnetic field as shown in the figure above.

At half rotation, Q makes contact with the brush X and P with brush Y. Therefore the current in the coil gets reversed and flows along the path DCBA. A device that reverses the direction of flow of current through a circuit is called a commutator. In electric motors, the split ring acts as a commutator.

Therefore the coil and the axle rotate half a turn more in the same direction. The reversing of the current is repeated at each half rotation, giving rise to a continuous rotation of the coil and to the axle.

In commercial motor an electromagnet is used in place of permanent magnet.

Commercial motors have soft iron core on which the coil is wound.

Question 30. Explain the phenomenon of electromagnetic induction. Describe an experiment to show that a current is set up in a closed loop when an external magnetic field passing through the loop increases or decreases.

Take two different coils of copper wire having large number of turns (say 40 and 90 turns respectively). Insert them over a non-conducting cylindrical roll, as shown in the figure given below. Connect the coil-1, having a larger number of turns, in series with a battery and a plug key. 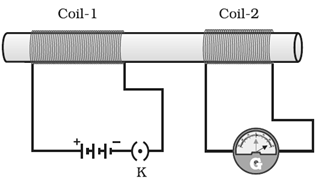 Also, connect the other coil-2 with a galvanometer as shown in the figure. Plug in the key. Observe the galvanometer. We will observe that the needle of the galvanometer instantly jumps to one side and just as quickly returns to zero, indicating a momentary current in coil-2.

Disconnect coil-1 from the battery. You will observe that the needle momentarily moves but to the opposite side. It means that now the current flows in the opposite direction in coil-2.

Question 31. Describe the working of an AC generator with the help of a labelled circuit diagram. What changes must be made in the arrangement to convert into a DC generator?

The labelled diagram of AC generator is as follows 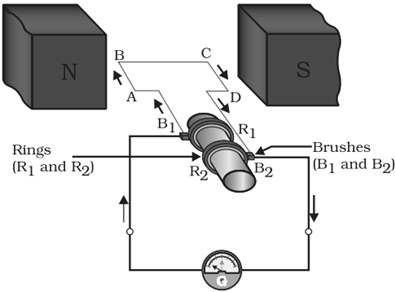 The working of AC generator is as follows:

An electric generator (as shown in figure above), consists of a rotating rectangular coil ABCD placed between the two poles of a permanent magnet. The two ends of this coil are connected to the two rings R1 and R2. The inner side of these rings is made insulated. The two conducting stationary brushes B1 and B2 are kept pressed separately on the rings R1 and R2, respectively.

The two rings R1 and R2 are internally attached to an axle.

The axle may be mechanically rotated from outside to rotate the coil inside the magnetic field. Outer ends of the two brushes are connected to the galvanometer to show the flow of current in the given external circuit.

When the axle attached to the two rings is rotated such that the arm AB moves up (and the arm CD moves down) in the magnetic field produced by the permanent magnet. Let us say the coil ABCD is rotated clockwise in the arrangement shown in figure. By applying Fleming’s right-hand rule, the induced currents are set up in these arms along the directions AB and CD. Thus an induced current flows in the direction ABCD. This means that the current in the external circuit flows from B2 to B1.

Question 32. Draw an appropriate schematic diagram showing common domestic circuits and discuss the importance of fuse. Why is it that a burnt out fuse should be replaced by another fuse of identical rating?

Schematic diagram of common domestic circuits is shown below: 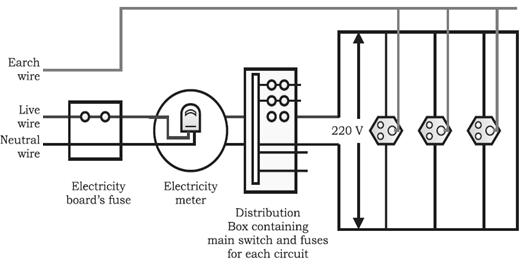 Fuse is safety device in a circuit prevents damage to the appliances and the circuit due to overloading. A fuse works on Joule heating effect and is connected is series with the electric devices. Every fuse has a specific rating, it means that a specific fuse will allow only specific amount of current through itself. When current exceeds the limit, then the fuse will heat up and melt.

Overloading occurs when the live wire and the neutral wire come into direct contact. In such a situation, the current in the circuit abruptly increases. This is called short-circuiting. The use of an electric fuse prevents the electric circuit and the appliance from a possible damage by stopping the flow of unduly high electric current. The Joule heating that takes place in the fuse melts it to break the electric circuit. Overloading can also occur due to an accidental hike in the supply voltage. Sometimes overloading is caused by connecting too many appliances to a single socket.