Powers of Prime Minister of India

Dr B R Ambedkar stated, ‘If any functionary under our constitution is to be compared with the US President, he is the Prime Minister and not the president of the Union’

After the emergence of Mr. Narendra Modi to the office of Prime Minister, the definition of dynamic leadership has taken new shapes. The Indian Prime Minister is as powerful as the President of America in terms of Domestic Powers but at the international level the situation is little different. Be it the discontinuance of the Indian currency denominations, surgical strikes, Foreign Policy, Power over the Nuclear Command and the likes, Prime Minister of India commands the supreme powers in practical and de-facto terms.

Sir Ivor Jennings said  “He is, rather, a sun around which planets revolve. He is the key-stone of the constitution.
All roads in the constitution lead to the Prime Minister.”

He is chief executive of the nation and works as head of Union Government. Hence Jawaharlal Nehru described Prime Minister as “The Linch-Pin of the Government” and as such his powers and functions are as follows:

Head of the Government

Leader of cabinet – like British Prime Minister he is not only primus inter pares but also according to Sir Ivor Jennings, a sun around which other ministers revolve like planets. It is he who recommends President regarding their appointment, he allocates and reshuffles various portfolios among minister, he presides over the meeting of council of ministers and influences their decision, he can ask any member to resign or recommend President to remove any minister. Hence on death or resignation of Prime Minister entire council of minister tends to collapse 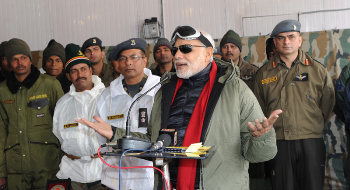 Though the Chief of the Defence Forces is the President of India but the real power lies in the Prime Minister. National Security Council which takes all the important decisions related to the Defence and Security of the nation gave advice to the Prime Minister of India on the important issues related to National Defence and Security.

India is a nuclear Power and has the special privileges under the NPT Treaty. Nuclear Command Authority is the master of the Nuclear weapons in India. It oversees all the important matters related to the Nuclear Weapons Programme of India. This Authority is chaired by the Prime Minister of India.

India’s Nuclear Weapon Program is based on the two premises. First is the no first use and the other is the assured retaliation. Nuclear attack can only be initiated after the order of the Nuclear Command Authority. The basic idea was that the Nuclear Weapons remains in the Civilian Hands through the elected leadership.

As we can see, the recent declaration by the Prime Minister regarding the Demonetisation of the Rs. 500 and Rs. 1000 denominations  has change the game of the black and unaccounted money altogether.

There arise various contingencies in the foreign countries related to the Indian National working there. It is the Prime Minister who takes initiatives for the rescues from the other countries. Operation Sankt Mochan, Operation Raahat, Operation Sukoon, Operation Safe Home Coming and others. Government of India has entered the Guinness Books for evacuating largest number of nationals from the foreign country through the civilian airlines in 1990.

Niti Aayog is the brain child of our Prime Minister Narendra Modi. This institution is a larger body then the Planning Commission. It ensures the participation of states in laying down the policies for the country and reinforces the value of Cooperative Federalism.
Prime Minister is the chairman of Niti Aayog. He serves as the coordinator, mentor and mediator to lay the best possible policy framework for all the states.

Prime Minister’s Office acts as the residual legatee of the Central Government, that is, it deals with all such subjects which are not allotted to any ministry/department. So accordingly, Department of Atomic Energy, Department of Space and the likes fall directly under the control of Prime Minister. So indirectly Prime Minister is the Chief of the Atomic Energy and the Space Agencies. For Example ISRO and all the related centers comes directly under PMO,

Leader of the Parliament

As a leader he determines the dates of its meetings and programs for the session. He also decides when the house has to be provoked or dissolved. As a chief spokesman he makes announcement of principal government policies and answers questions on then

Chief spokesman in foreign relations – in international conferences it is he who speaks for the nation. Even in dealing with non aligned countries and conferences he takes lead.

He is the crisis manager-in-chief at the political level during emergencies. He is leader of the party in power and the political head of the services. Prime Minister is the only person who can solely change the conditions of the country. He is the most important person of the whole country. The present Prime Minister Narendra Modi is the living example of this statement.