In SBI PO exam problems on seating arrangement topic are frequently asked in the Logical Reasoning Section. Candidates who are appearing in SBI PO mains exam 2016 must solve the given below puzzle to sharpen and strengthen their preparation.

In SBI PO exam problems on seating arrangement topic are frequently asked in the Logical Reasoning Section. Generally, one puzzle on seating arrangement carries around 5 questions. Candidates who are appearing in SBI PO mains exam must solve the given below puzzle to sharpen and strengthen their preparation.

Directions (1 - 5): Study the following information and answer the questions given below:

1. Who is sitting second to the right of W?

2. How many persons are sitting between Z and U when counted from the left side of Z?

3. Which of the following statements is true regarding Z?

a) The one who is second to the right of Z is a female.

b) Z is facing the centre.

d) The immediate neighbours of Z are facing outside.

4. What is V’s position with respect to Y?

a) Third to the left.

b) Third to the right.

c) Second to the left.

d) Second to the right.

e) None of these Directions

5. If all the friends are asked to sit in an alphabetical order starting from S in an anti clockwise direction, the positions of how many will remain unchanged (excluding S) ? 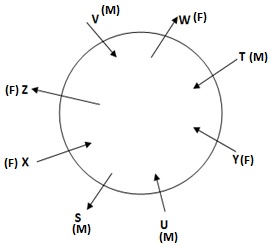 Directions (6-10) Study the following information to answer the questions.

Twelve people are sitting in two parallel rows containing 6 people each, in such a way that there is an equal distance between adjacent persons. In row-1, six girls are sitting - Priya, Leena, Ridima, Sonal, Teena, and Usha are seated and all of them are facing south. In row-2, six boys are sitting - Amit, Girish, Chetan, Dev, Ehaan and Farruk are seated and all facing north. Therefore in the given seating arrangement each member seated in a row faces another member of the outer row.

6. Who amongst the following sits at the extreme ends of the rows?

7. Who amongst the following faces Sonal?

8. How many persons are seated between Usha and Ridima?