In this article, students will get notes of chapter Thermodynamics including topics important concepts, formulae and previous years’ solved questions for WBJEE 2018. These notes will help engineering aspirants in their preparation.

To help aspirants to score good marks in coming WBJEE 2018, the engineering section bring to you the notes of chapter Thermodynamics. Students always get 1-2 questions from this chapter in the examination.

10. Relationship between Cp and Cv,

1. These notes are based on the latest syllabus and pattern of WBJEE entrance examination.

2. These notes are prepared by Subject Experts of Chemistry.

The System and the Surroundings

The Universe = The system + The surroundings

Types of the System

State variables / State functions: The functions whose values depend only on the state of the system and not on how it is reached are called state functions.

For ex: heat given to system or work done on system is taken as positive

For ex: heat given out by the system or work done by system is taken negative 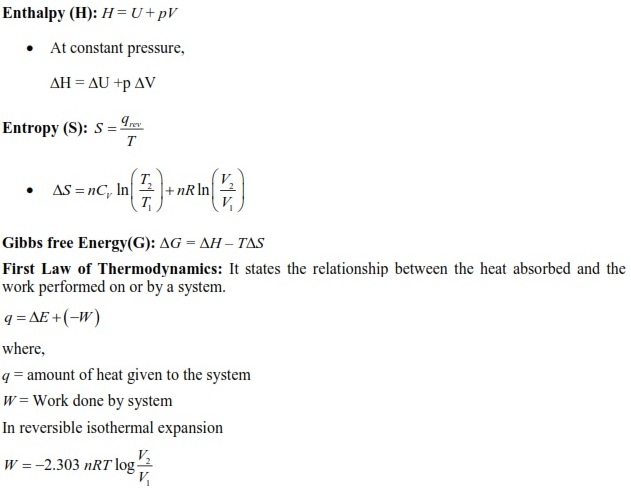 Standard enthalpy of reactions: It is the enthalpy change for a reaction when all the participating substances are in their standard states. 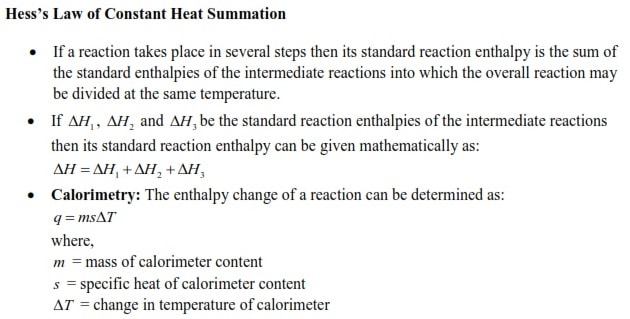 Some previous years' solved questions are given below:

We have the reaction,

The condition for a reaction to occur spontaneously is

(A) ΔH must be negative

(B) ΔS  must be negative

When ΔG<0 then the reaction occur spontaneously.

So, for spontaneous reaction ΔH-TΔS should be negative.

Which of the following plots represent an exothermic reaction ?

Hence, the correct option is (D).

Students can also have a look on the following questions and solutions to check their preparation.

The criterion for spontaneity of any process the change in entropy is (ΔSsystem + ΔSsurrounding ) > 0.

Hence, the correct option is (D).

Elements in its standard state have zero enthalpy of formation. Since, Cl2 is gas at room temperature, therefore ΔH° of Cl2(g) is zero.

Hence, the correct option is (B).

Which of the following statements is false?

(A) Work is a state function

(B) Temperature is a state function

(D) Work appears at the boundary of the system

Work is not an example of state function.

Hence, the correct option is (A).

In thermodynamics, a process is called reversible when

(A) Surroundings and system change into each other

(B) There is no boundary between system and surroundings

(C) The surroundings are always in equilibrium with the system

(D) The system changes into the surroundings spontaneously

When the surroundings are always in equilibrium with the system, then the process is called reversible process.