While addressing the BRICS Business Forum, PM Narendra Modi stated that the BRICS nations have accelerated economic growth despite global recession and have enabled millions to come out poverty and achieved breakthroughs in technology and innovation. 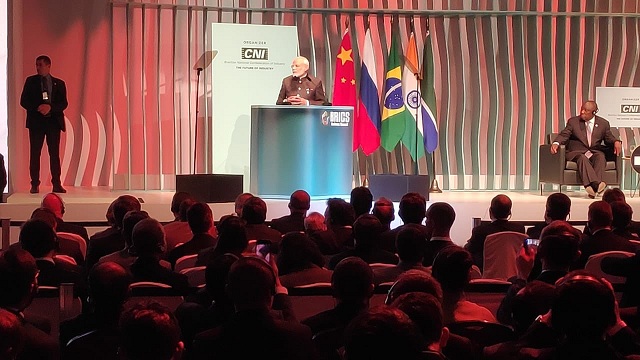 The Prime Minister reiterated that India is one of the world’s most open and investment-friendly nations due to business-friendly reforms, political stability and predictable policy.

During their bilateral talks, the two leaders agreed to comprehensively enhance the strategic partnership between the two nations. PM Modi outlined areas for potential investment from Brazil including areas such as agricultural equipment, biofuels, post-harvest technologies and animal husbandry. 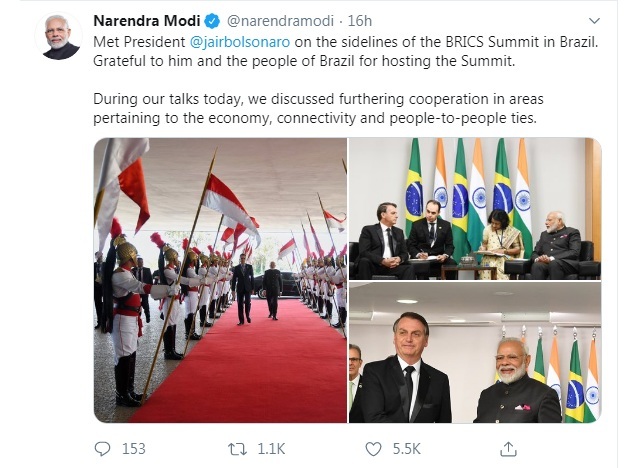 The two leaders also discussed other areas of cooperation such as defence and space sector. Jair Bolsonaro informed PM Modi that he would be accompanied by a large business delegation during his visit to India in January. Further, the Indian Prime Minister welcomed the Brazilian President's decision to grant visa-free travel to Indian citizens.

The Chinese President expressed his deep appreciation to PM Modi for the warm welcome he received during the 2nd Informal Summit between India and China at Mamallapuram in Chennai. 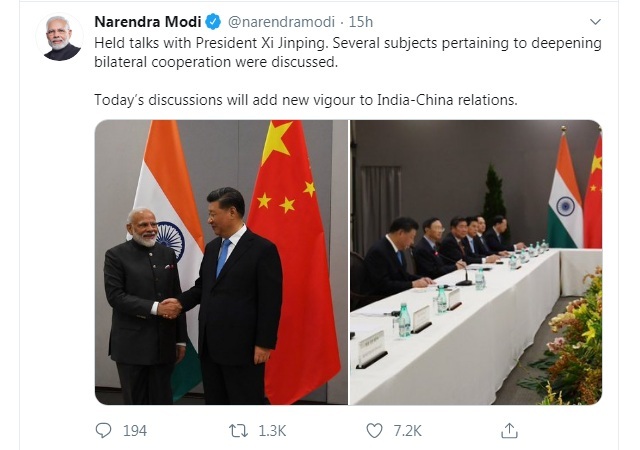 Xi Jinping invited PM Modi to China for the third informal summit between the two nations in 2020. The two leaders further agreed on the importance of maintaining close dialogue on matters such as trade and investment. The leaders further reviewed the ongoing preparations for the celebration of the 70th anniversary of the establishment of diplomatic relations between India and China in 2020.

The leaders also reiterated the importance of maintaining peace and security in border areas and exchanged views on many issues including RCEP, WTO and BRICS.

Prime Minister Narendra Modi met Russian President Vladimir Putin at Brasilia on November 13, 2019 ahead of the BRICS Summit 2019. This is the fourth meeting of the two leaders in 2019.

During the talks, the two leaders reviewed the progress made in the bilateral relationship between the two nations since PM Modi’s visit to Vladivostok in September 2019.

The two leaders noted that the USD 25 billion bilateral trade target by 2025 has already been achieved. They further decided to hold the 1st bilateral regional forum between Russian Provinces and the Indian States in 2020 to do away with the trade barriers at the regional level. 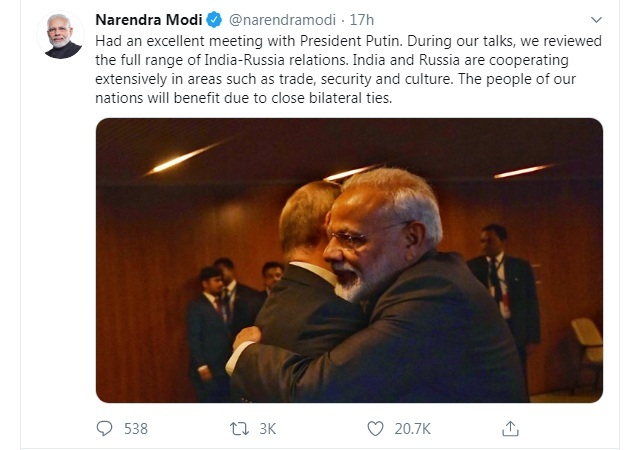 They further noted the progress made in oil and natural gas import. Russian President Vladimir Putin highlighted the potential of the Arctic region in natural gas and invited India to invest in the region.

The leaders also reviewed the progress made in the Infrastructure sector especially railways including raising the speed of the Nagpur-Secunderabad sector railway line. The leaders further noted cooperation between India and Russia in Defence sector and Civil Nuclear Energy. They also noted that the two nations share a common position on several international issues and agreed to continue close consultations.