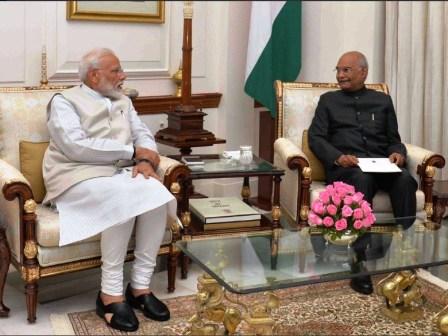 The 2019 Lok Sabha Election Results are out, the Bhartiya Janata Party (BJP) has won 303 seats on its own, surpassing its previous record of 282 seats in 2014. The 16th Lok Sabha has been dissolved with the acceptance of the resignation of Prime Minister Narendra Modi and his Council of Ministers by President Ram Nath Kovind on May 24, 2019.

Following the declaration of results, the Union Cabinet passed a  resolution recommending the dissolution of the 16th Lok Sabha. The Prime Minister Modi met the President at Rashtrapati Bhawan and tendered his resignation.

As per the Lok Sabha Election Results final tally, the BJP-led National Democratic Alliance wins over 350 seats; UPA gets 90 seats; the DMK wins 23 seats; Trinamool Congress and YSR Congress win 22 seats each; the Shiv Sena bags 18 seats and the Janata Dal (United) gets 16.  The Left parties, CPI gets 2 and CPI-M gets 3. Over 10 parties could only secure one seat including AIADMK, JD(S), Aam Admi Party, and JMM.

The BJP, with 303 seats, displayed a thumping victory in states like Bihar, Uttar Pradesh, Haryana, Delhi, Gujarat, Rajasthan, Uttarakhand, Himachal Pradesh, and Arunachal Pradesh. The Congress could not even attain the status of 'Leader of Opposition', securing just 52 seats this time.

• In Gujarat, the BJP won all the 26 Lok Sabha seats

• BJP retained all 5 seats in Uttarakhand

• In Delhi, the BJP won all 7 seats with massive margins

• In Jammu and Kashmir, BJP and the National Conference won 3 seats each.

• In Tripura, BJP won both the parliamentary seats.