The objective of Angikaar is to bring social behaviour change with special focus on waste management, water and energy conservation. 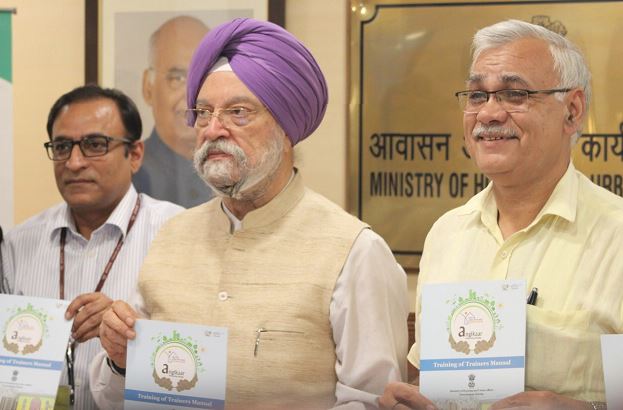 Minister of State (Independent Charge) for Housing and Urban Affairs, Hardeep Puri has launched campaign ‘Angikaar’ for change management on August 20, 2019. The campaign has been launched according to the vision of PM Narendra Modi.

The objective of Angikaar is to bring social behaviour change with special focus on waste management, water and energy conservation, tree plantation, sanitation, health and hygiene. Beneficiaries of different government schemes under Pradhan Mantri Awas Yojana - PMAY (Urban) will be covered through community mobilization and other activities.

• The campaign will converge with schemes and Missions of other Ministries dealing with the subjects decided under Angikaar.
• The convergence would especially focus on Ujjwala for gas connection and Ayushman Bharat for health insurance to the beneficiaries of PMAY (U).
• Angikaar Campaign aims at reaching out all the beneficiaries of PMAY (U) beneficiaries.
• This newly announced scheme will be initiated in all target cities on October 2, 2019 observing 150th Gandhi Jayanti.
• Various awareness activities like door-to-door campaign, ward and city level events will be organized.

This e-course will work as a tool for effective and efficient disaster management in the field of Civil Engineering, Architecture, Urban and Regional Planning, Construction Engineering and Management, Housing and Infrastructure Planning and Building Materials Research.