The squad named ‘Knightingale’ has been formed to ensure safety and security of women at public places. The presence of more women police officers on the road will hopefully instil a sense of confidence among women. 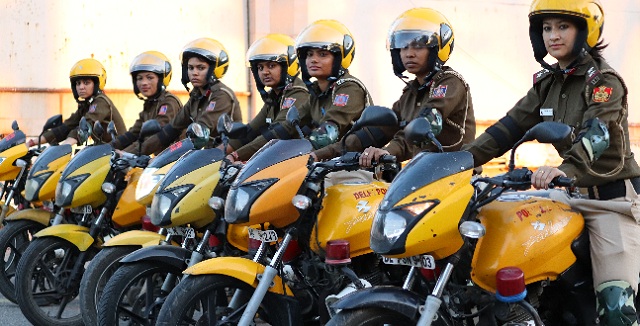 The South District Police in Delhi launched an 'all women patrolling squad' on March 8, 2018, on the occasion of International Women’s Day.

The squad named ‘Knightingale’ has been formed to ensure safety and security of women at public places.

The squad comprises 16 women personnel, aged between 20-35 years, in the ranks of sub-inspectors and constables who have been trained in unarmed combat and driving.

• The personnel have been given specialised training in driving and riding and in the maintenance of squad vehicles.

• The patrol squad has also been given training in weapon handling, firing and unarmed combat.

• They have also been equipped with motorcycles with four riding gear, a gypsy with a woman police officer as the driver and in-charge to lead the patrol team, wireless sets, protection team and firearms.

The presence of more women police officers on the road will hopefully instil a sense of confidence among women.

The patrolling squad has been specifically tasked to ensure greater visibility in areas frequented by women.

The squad would be especially focusing on areas that have schools and colleges during daytime and busy markets and public places during evening hours.

The areas that will have the most focus include Sarojini Nagar Market, Select City Walk Mall, Hauz Khas Village, Kamla Nehru College and Gargi College.

Besides this, the lady police officers have been briefed to be particularly sensitive to the problems of school girls, to encourage them to report their problems and develop a good rapport with them.

The presence of Women Patrolling Squad in the area will also put a check on the anti-social elements.The initiative is a step forward in encouraging and motivating women police personnel by making the system more inclusive.