Epidemic Act amended: Penalty for any violence against health care workers increased to 7 years in Jail

In the case of grievous injuries to the healthcare workers, the accused can face imprisonment ranging from 6 months to 7 years.

President Ram Nath Kovind on April 23, 2020 gave his assent to the promulgation  of the new ordinance that seeks to amend the Epidemic Disease Act 1897 to ensure safety of health care workers. The Union Cabinet had approved the ordinance on April 22.

The ordinance seeks to end violence against health workers amid several reports of attacks on medics. It seeks to make such acts of violence as non-bailable offences, increase maximum penalty to 7 years of jail term and provide compensation for the damage caused to property. The ordinance defines violence as  harassment and physical injury to the medical personnel and damage to property.

The information was shared by Union Minister Prakash Javadekar while briefing the media after the cabinet meeting. The Minister stated that the government will not tolerate any incident of violence or harassment against healthcare workers. He stated that the medics who are trying to save the people and the nation from the coronavirus epidemic are unfortunately facing attacks. 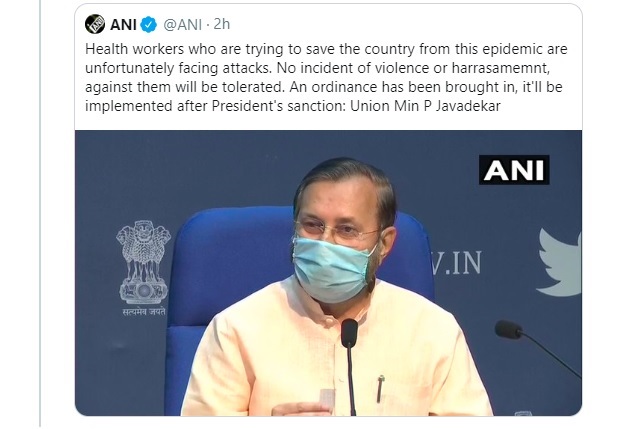 The Ministry of Home Affairs has issued directions to all the states to ensure adequate security to the medical staff, healthcare professionals and other frontline workers to end violence against them. The Ministry has also warned that strict action will be taken against those who try and obstruct the performance of the last rites of the healthcare workers, CovidWarriors,  who succumb to COVID-19 virus while serving the nation in its fight against coronavirus outbreak.

The announcement came a few hours after Union Home Minister Amit Shah addressed the Indian Medical Association through a video conference, assuring them complete safety, urging them to withdraw the symbolic protest scheduled for later this month against incidents of violence on health workers involved in the care of COVID-19 patients. The IMA had proposed to hold 'White alert' and 'Black day' protests on April 22 and 23. The protests have now been called off.

• The new amendments include heavy fines for any kind of violence against health workers and imprisonment up to 7 years. The offence has also been made a non-bailable offence.

• In the case of grievous injuries to the healthcare workers, the accused can face imprisonment ranging from 6 months to 7 years. They can also be penalised with a fine ranging from Rs 1-5 Lakhs.

• Such crimes have also been made cognizable and non-bailable. The investigation in such cases will be done within 30 days.

• Those found guilty will be sentenced to a jail term ranging from 3 months to 5 years and will face fine worth Rs 50000 to Rs 2 lakh. 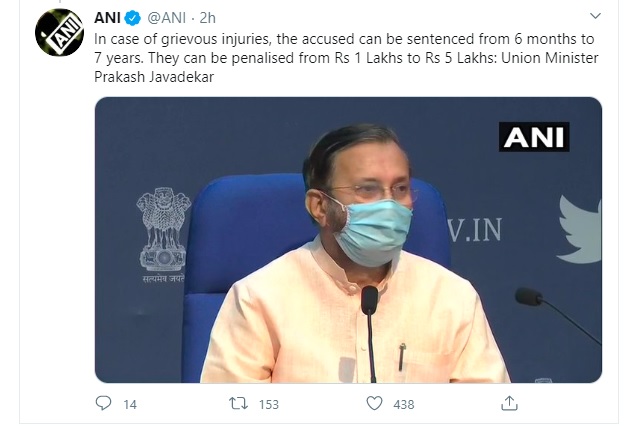 •  Besides this, the amendments include provisions to provide compensation for the injury caused to the healthcare service personnel or for causing any kind of damage or loss to the property. For the damage caused to the vehicles or clinics of the medics, the accused will be required to pay a compensation amount, which will be twice the market value of the damaged property. 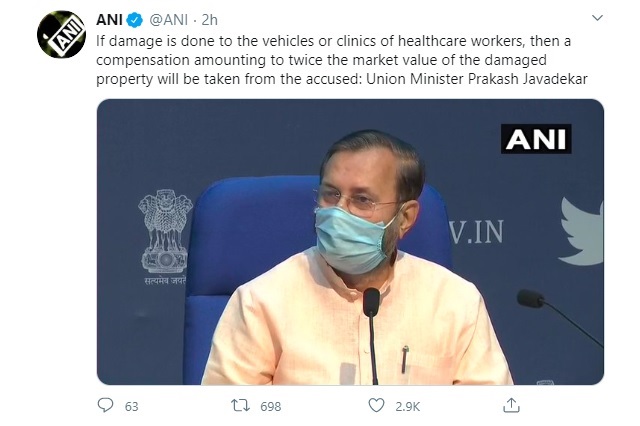 • The new ordinance will help protect the healthcare service personnel and their living and working premises against violence.

• It will provide protection to the entire health fraternity including doctors, nurses, paramedics up to ASHA workers.

• The amendments have also ensured that investigation for such cases takes place in a time-bound manner.

The new amendment to the Epidemic Diseases Act, 1987 was necessitated after several incidents of violence were witnessed against the healthcare workers across the country while they discharged their duties, standing in the frontlines of India’s battle against COVID-19 pandemic.