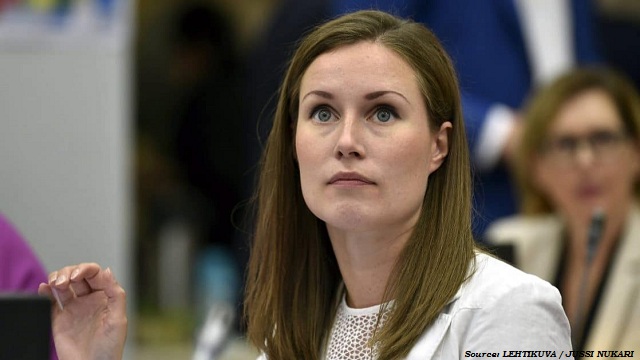 Sanna Marin is set to take over as the new Prime Minister of Finland, becoming the youngest-ever prime minister in the world. The 34-year-old was selected to head Finland’s coalition government after she was elected as the leader of the Social Democratic Party, the largest party in the coalition.

The former transport minister will not only become the world’s youngest head of government but she will also be the third female head of the government in Finland’s political history. Sanna Marin will be assuming her new role soon.

Finland’s coalition government comprises the Social Democratic Party, Left Alliance, Green League, Centre Party and the Swedish People’s party. Besides Social Democrats, the other four parties are also being led by women, three of whom are aged below 35 years.

Following are the names of all the leaders of the coalition parties:

Sanna Marin beat her rival Antti Lindtman with 32-29 votes at the Social Democratic Party council meeting on December 8, 2019 to replace incumbent Antti Rinne as the new Prime Minister of Finland.

Sanna Marin, a lawmaker since 2015, has been the vice chairwoman of the Social Democratic Party. She was also serving as the minister for transport and communications until this week.

She will now become the world’s youngest prime minister and Finland’s third female head of the government.

Finland currently holds the presidency of the European Union till the end of 2019. Sanna Marin is likely to take over soon so that she can represent Finland at the European Union leaders’ summit in Brussels from December 12-13, 2019.

However, all five coalition parties agreed to continue in Sanna Marin’s new government, saying that they are committed to the government program agreed upon after April elections.

The Marin-led government is expected to win a comfortable majority of 117 seats in the 200-seat Parliament (Eduskunta).

Antti Rinne, the current chairman of the Social Democrats is expected to continue until next year and he is also expected to be appointed as the Parliament's vice speaker.