Florence Nightingale Awards 2019: Nurse Lini Sajeesh from Kozhikode, who had passed away while caring for a NIPAH patient in Kerala, was honoured posthumously. 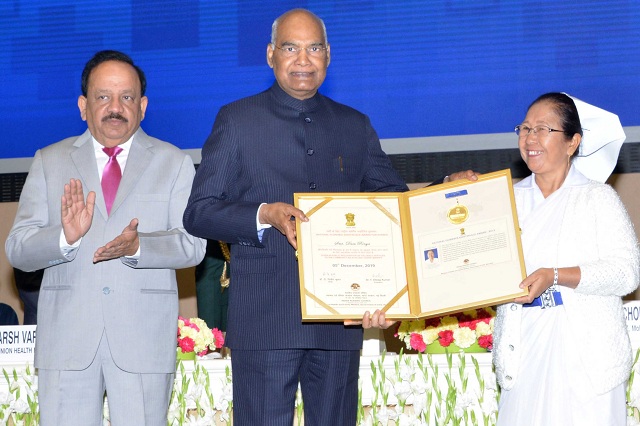 While conferring the awards, the President reiterated the significant role played by the nurses in delivering quality healthcare, addressing multiple health challenges and caring for the health needs of families, individuals and communities as a whole. The President stated that nurses are a symbol of seva, shushrusha and karuna. They are the face of healthcare services for patients and their families.

President Kovind further stated that with the changing lifestyles, the demand for professional caregivers, especially for the elderly, is on the rise. The President suggested the development of short training programs for care-givers by the nursing institutions in the nation. The care-givers are not professionally trained nurses and hence, they would benefit from basic training in geriatric care.

The World Health Organisation also announced the year 2020 as the ‘Year of Nurses and Midwives’. The year 2020 also commemorates the 200th birth anniversary of Florence Nightingale, after whom the nursing awards have been named.

• The National Florence Nightingale Awards 2019 were conferred upon 36 nursing professionals including midwives, nurses and lady health visitors from different states and union territories. 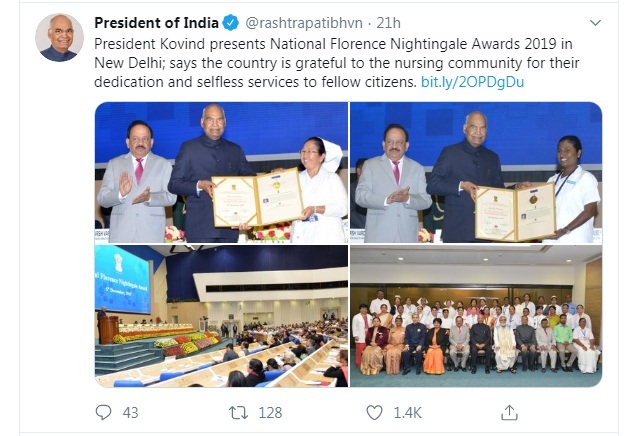 • One award was conferred posthumously to honour nurse Lini Sajeesh from Kozhikode, who had passed away while caring for a NIPAH patient in Kerala. The award was received by her husband Sajeesh.

• N Sobana, who had played an important role in nursing and caring for the Nipah patients for over a month as the head nurse in the Calicut Medical College hospital was also honoured with the national award.

Lini Sajeesh was a nurse at the EMS Memorial Cooperative hospital at Perambra. She got infected with the deadly Nipah virus while treating the first Nipah virus patient during the initial days of the virus outbreak in May 2018. The nurse had to be admitted to the ICU in Kozhikode Medical College where she later died after developing multiple complications on May 21. 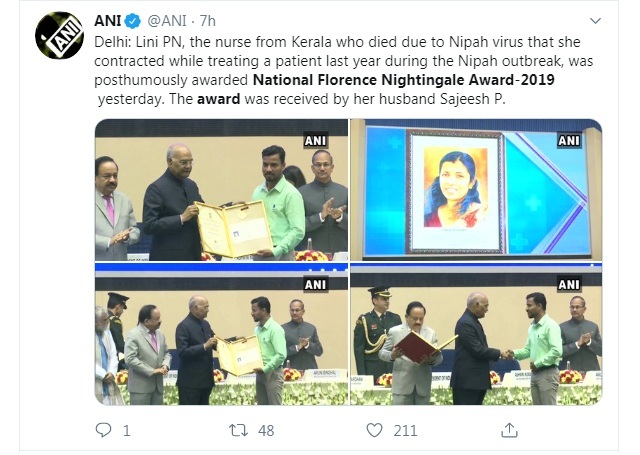 The Florence Nightingale Awards were constituted in 1973 by the Union Government to recognize the meritorious services rendered by the nurses to the society as a whole.

The awards are conferred annually for excellence in nursing. The awardees include auxiliary nurse midwives (ANMs), lady health visitors (LHVs) and nurses from across the country.

The award carries a certificate and a cash prize worth Rs 50000.