Speaking at the virtual conference, Union Minister Piyush Goyal called for further enhancing access to affordable medicines and facilitating easier movement of health professionals across national borders. The Minister stated that despite many challenges, India has been a dependable and affordable source of high quality medical and pharma products to nearly 190 countries around the world.

He further expressed solidarity with the world and expressed India’s support to all frontline health professionals, sanitation workers and other workers involved in maintaining the flow of essential services to fight the Coronavirus pandemic. The Union Commerce Minister held bilateral virtual meetings as well with his counterparts from the other nations. 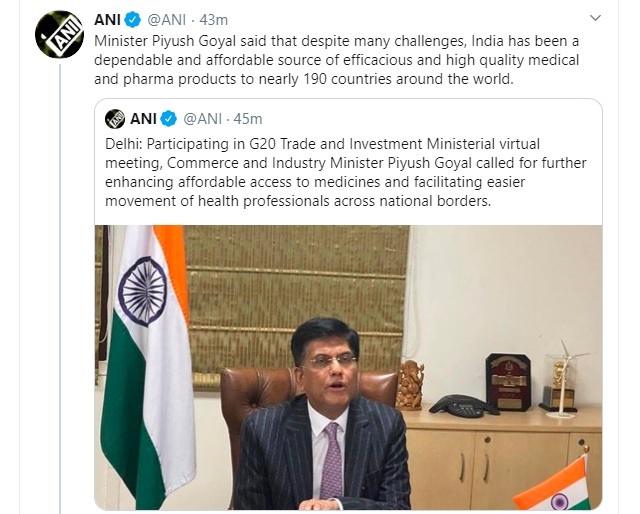 • Union Minister Piyush Goyal urged the G20 nations to come up with a G-20 global framework to enhance affordable access to medicines and enable easier movement of health professionals across national borders.

• He also insisted that G20 members uphold their multilateral commitments.

• He stated that the nations need to ponder over a framework under which critical medicines, medical equipment, diagnostic equipment and kits and health professionals can be deployed across territories at a short notice under a pre-decided protocol.

• India also expressed its support to temporarily doing away with requirements such as customs and banks of producing the original documents by importers to obtain various clearances during the COVID-19 outbreak.

The Extraordinary G20 Trade and Investment Ministerial virtual meeting was held less than a week after the first virtual G20 summit, which was attended by Prime Minister Narendra Modi. The summit was hosted by Saudi Arabia, the current chair of the group. During the summit, the G20 leaders pledged to inject $5 trillion into the global economy to lessen the impact of the coronavirus outbreak across the world.