The special report titled ‘Global Warming of 1.5°C’ traces the impact of global warming of 1.5°C above pre-industrial levels and related global greenhouse gas emission pathways. It states that going past 1.5°C is dicing with the planet's liveability and the temperature could be exceeded in just 12 years, by 2030.

The Intergovernmental Panel on Climate Change (IPCC) approved a Special Report on Global Warming of 1.5°C on October 6, 2018 at Incheon, South Korea. In the new assessment, IPCC issued its the most extensive warning on the risks of rising global temperatures and said that limiting global warming to 1.5°C would require rapid, far-reaching and unprecedented changes in all aspects of society.

The special report titled ‘Global Warming of 1.5°C’ traces the impact of global warming of 1.5°C above pre-industrial levels and related global greenhouse gas emission pathways, in the context of strengthening the global response to the threat of climate change, sustainable development and efforts to eradicate poverty. The report says that going past 1.5°C is dicing with the planet's liveability and the temperature could be exceeded in just 12 years, by 2030.

The IPCC released their report after three years of research and a week of intense debate between scientists and government officials. The report will be a key scientific input into the Katowice Climate Change Conference in Poland in December 2018, when governments review the Paris Agreement to tackle climate change.

The special report states that the world is completely off track from achieving its climate goal and is instead heading towards an increase of 3 degree Celsius.

It highly emphasises on limiting global temperature rise to 1.5 degree Celsius above the pre-industrial level. One of its key messages is that the world is already seeing the consequences of 1°C of global warming through more extreme weather, rising sea levels and diminishing Arctic sea ice.

What effect would limiting global warming to 1.5°C have on climate change in comparison to 2°C?

The report highlights a number of climate change impacts that could be avoided by limiting global warming to 1.5°C as compared to 2°C.

How to limit global warming to 1.5°C?

• The report finds that limiting global warming to 1.5°C would require rapid and far-reaching transitions in land, energy, industry, buildings, transport and cities.

• It notes that limiting global warming to 1.5°C is possible within the laws of chemistry and physics but doing so would require unprecedented changes.

• It states that to achieve this, global net human-caused emissions of carbon dioxide (CO2) would need to fall by about 45 percent from 2010 levels by 2030, reaching 'net zero' around 2050.

• This means that any remaining emissions would need to be balanced by removing CO2 from the air.

• The report, however, noted that the effectiveness of such techniques are unproven at a large scale and some may carry significant risks for sustainable development.

Consequences of limiting temperature to 1.5°C

Top 10 findings of the Special Report

1. Human activities are estimated to have caused approximately 1.0°C of global warming5 above pre-industrial levels, with a likely range of 0.8°C to 1.2°C. Global warming is likely to reach 1.5°C between 2030 and 2052 if it continues to increase at the current rate.

2. Warming from anthropogenic emissions including greenhouse gases and aerosols from the pre-industrial period to the present will continue to cause further long-term changes in the climate system, such as sea level rise, with associated impacts, but these emissions alone are unlikely to cause global warming of 1.5°C

3. Climate-related risks for natural and human systems are higher for global warming of 1.5°C than at present but lower than at 2° C. These risks depend on the magnitude and rate of warming, geographic location, levels of development and vulnerability and on the choices and implementation of adaptation and mitigation options

4. The climate models project robust differences in regional climate characteristics between present-day and global warming of 1.5°C and between 1.5°C and 2°C. The differences include increases in mean temperature in most land and ocean regions, hot extremes in most inhabited regions, heavy precipitation in several regions and the probability of drought and precipitation deficits in some regions.

5. By 2100, the global mean sea level rise is projected to be around 0.1 metre lower with global warming of 1.5°C compared to 2°C and the sea level will continue to rise well beyond 2100 and the magnitude and rate of this rise will depend on future emission pathways.

6. On land, the impact on biodiversity and ecosystems, including species loss and extinction, is projected to be lower at 1.5°C of global warming compared to 2°C. 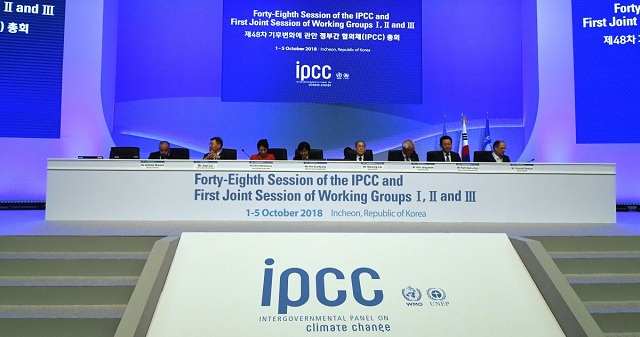 7. The climate-related risks to health, livelihoods, food security, water supply, human security, and economic growth are projected to increase with global warming of 1.5°C and increase further with 2°C.

8. Most adaptation needs will be lower for global warming of 1.5°C compared to 2°C. There are a wide range of adaptation options that can reduce the risks of climate change.

10. Strengthening the capacities for climate action of national and sub-national authorities, civil society, the private sector, indigenous peoples and local communities can support the implementation of ambitious actions implied by limiting global warming to 1.5°C

The Special Report on Global Warming of 1.5°C, known as SR15, was prepared by ninety-one authors and review editors from 40 countries in response to an invitation from the 21st Conference of the Parties (COP21) to the United Nations Framework Convention on Climate Change in December 2015, when they adopted the Paris Agreement.

As part of the decision to adopt the Paris Agreement, the IPCC was invited to produce, in 2018, a Special Report on global warming of 1.5°C above pre-industrial levels and related global greenhouse gas emission pathways.

The IPCC accepted the invitation, adding that the Special Report would look at these issues in the context of strengthening the global response to the threat of climate change, sustainable development, and efforts to eradicate poverty.

The Global Warming of 1.5°C is the first in a series of special reports to be produced in the IPCC's Sixth Assessment Cycle. Next year, the IPCC will release a special report on the ocean and cryosphere in a changing climate and climate change and land, which will look at how climate change affects land use.