He continued to serve in the office despite his illness and mostly operated from his private residence. It was during his illness, he presented the Goa Budget 2019-20.

Goa Chief Minister and former Union Defence Minister, Manohar Gopalkrishna Prabhu Parrikar passed away on March 17, 2019 after battling with pancreatic cancer. He was 63.

Earlier in February 2018, Parrikar was diagnosed with advanced pancreatic cancer and had been in and out of hospital in Goa, Mumbai, Delhi and New York since then. He was constantly seen wearing medical paraphernalia, a nasogastric tube. 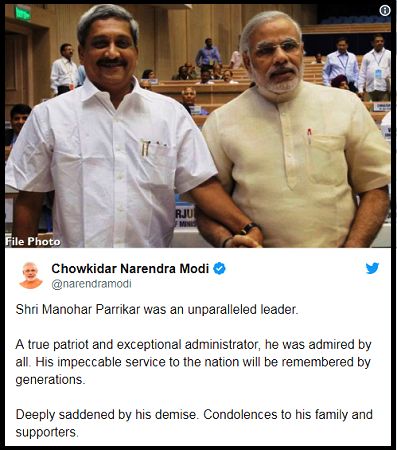 He continued to serve in the office despite his illness and mostly operated from his private residence. It was during his illness, he presented the Goa Budget 2019-20.

He is survived by his two sons, Utpal and Abhijat. Parrikar’s wife too succumbed to cancer while he was an MLA in 2000.

• Manohar Parrikar was a member of the Bharatiya Janata Party (BJP).

• Born on 13 December 1955, Parrikar did his graduation in metallurgical engineering from IIT Bombay in 1978.

• Parrikar debuted in Goa Assembly by winning Panaji seat as a member of BJP  in November 1994.

• In October 2000, he became the first IITian to be elected as the Chief Minister of Goa.

• In 2001, he was awarded the Distinguished Alumnus Award by IIT Bombay, following which he announced the cyberage scheme in the state to provide free computers to higher secondary school students.

• In February 2002, the Goa state assembly was dissolved; however, he was re-elected as the Goa CM in June 2002. This was his second term as Goa CM.

• His third term as the Goa CM came in March 2012 after BJP fetched 21 seats in 40-member House. Upon his election, he announced popular schemes like ‘Griha Aadhar’ and ‘Laadli Laxmi’.

• Parrikar resigned as Goa Chief Minister in 2014 to contest the 2014 elections where he won from his constituency in Uttar Pradesh.

• He served as Defence Minister from 2014-17 on the invitation of Prime Minister Narendra Modi. During his stint as Defence Minister, Indian Army carried out surgical strikes across LoC after Pakistani terrorists killed 19 soldiers at Uri on September 18, 2016.

• However, he returned to State politics in March 2017 as the Goa Chief Minister for the fourth time in his political career to lead a coalition government of distinct parties and independents headed by the BJP.

• He represented the Panaji constituency in the Legislative Assembly of Goa.