The Apache attack helicopter has the capability to carry out precision attacks at standoff ranges and operate in hostile airspace with threats from the ground. 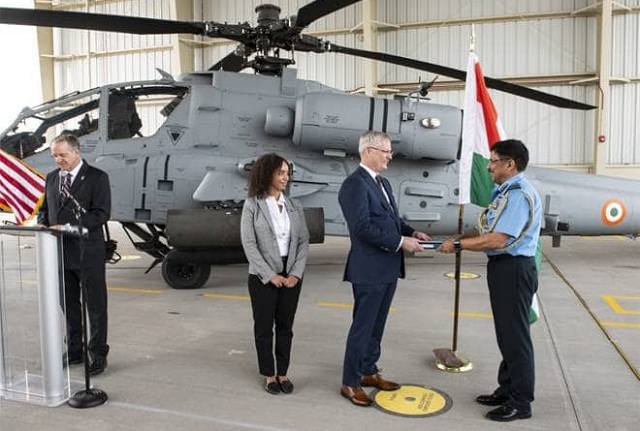 The Indian Air Force has received the first Apache Guardian helicopter from US aircraft manufacturer, Boeing. India had signed a multi-billion dollar contract with the US in September 2015, for 22 of these helicopters.

The attack helicopter has been customised to suit Indian Air Force’s future requirements and would have significant capability in mountainous terrain.

• It has the capability to carry out precision attacks at standoff ranges and operate in hostile airspace with threats from the ground.

• The helicopter also has the ability to transmit and receive the battlefield picture, to and from the weapon systems through data networking, which makes it a lethal acquisition.

• Further, the helicopter has an oversea capacity and is fit for maritime operations, potentially enabling naval strikes.

• The helicopter will provide a significant edge in any future joint operations in support of land forces.

• A select air and ground crew of the Indian Air Force have undergone training at the training facilities at the US Army base Fort Rucker, Alabama.

• The trained personnel would be given the responsibility to lead the operationalisation of the Apache fleet in the IAF.

The Indian Air Force had signed a contract with US Government and M/s Boeing Ltd in September 2015 for 22 Apache helicopters.

Besides this, the Defence Ministry had approved the procurement of six Apache helicopters in 2017 along with weapons systems from Boeing at a cost of Rs 4,168 crore for the Army.

This will be the Indian Air Force’s first fleet of attack choppers.

India and Vietnam on May 12, 2019 discussed a range of issues, including ways to strengthen the comprehensive strategic partnership between the two nations to ensure peace and security in the region.

Bilateral Ties: India and Vietnam share a strong bilateral relationship, based on mutual understanding, trust and similar views on regional and international issues.

Defence and Security: The two nations agreed to strengthen cooperation in the field of defence and security, peaceful uses of atomic energy and outer space, oil and gas and renewable energy, agriculture and innovation-based sectors.

Indo-Pacific region: The nations also reiterated the importance of building a peaceful and prosperous Indo-Pacific region on the basis of respect for national sovereignty and international law. They agreed to work towards an inclusive, open, transparent and rules-based regional architecture, based on freedom of navigation and peaceful settlement of disputes in accordance with the international law.

Space: The Indian Vice President informed the Vietnamese Prime Minister that India is ready to partner with the nation in satellite construction, both for civilian and non-civilian uses.

Trade: Vietnam is an important trading partner of India. The bilateral trade between the two nations stood at nearly USD 14 billion in 2018, having nearly doubled from USD 7.8 billion three years ago. To further boost bilateral ties, the two nations expressed commitment to enhancing trade and investments and agreed to facilitate direct air connectivity to promote tourism, trade and people-to-people relations.

Pharmaceutical Industry: Indian Vice President Naidu sought Vietnamese Prime Minister's personal intervention in facilitating the entry of Indian pharmaceutical products into the nation and assured him that the Indian companies can provide high tech health systems and medicines for public health in Vietnam at an affordable cost.