India State of Forest Report 2019 has been prepared by Forest Survey of India (FSI). It is a biannual report. 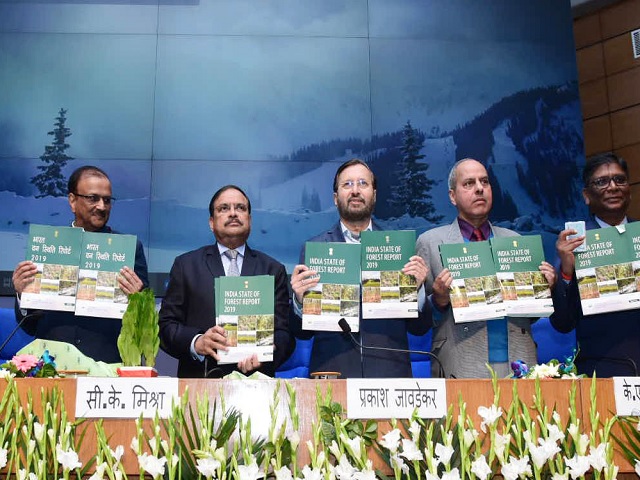 India State of Forest Report 2019: Union Minister Prakash Javadekar on December 30, 2019, released a report depicting forest cover in India. According to this report, the forest area in the country has increased by 5,188 square km in the last two years. It has also mentioned in the report that this green area covers about 25% of the total geographic area of the country.

India State of Forest Report 2019 has been prepared by Forest Survey of India (FSI). It is a biannual report. The report is prepared after mapping of forests and trees through satellite. According to the report, the forest area has increased by 3976 kilometers and the area of trees by 1212 square kilometers in two years.

• According to the report, the three states where forest area has grown the most include Karnataka (1025 km), Andhra Pradesh (990 km) and Kerala (823 km).
• It has also mentioned in the report that the forest area of the northeastern states has decreased except Assam.
• A marginal increase in forest cover was recorded in Himachal, Uttarakhand, Uttar Pradesh, Delhi, and Bihar.
• The report shows that the forest area has also increased in the infertile regions of Rajasthan.
• Jammu and Kashmir grew 371 sq. km of forest cover while Himachal Pradesh grew 334-sq. km of forest area.
• The report highlights that all hill districts of India has 2,84,006 sq. km of forest area which is 40.30% of the total geographical area of all hill districts of the country.

India State of Forest Report 2019 said that Mangroves have also increased in coastal areas. It has increased in Gujarat, Maharashtra, and Odisha. The total mangrove area is recorded to be 4975 square kilometers. Mangroves are trees that are found in saltwater or semi-saltwater. According to the report, 71.24 million tonnes of carbon stock has been recorded in the country.