The AK-203 is a convertible rifle. It can be used in semi-automatic and automatic ways. 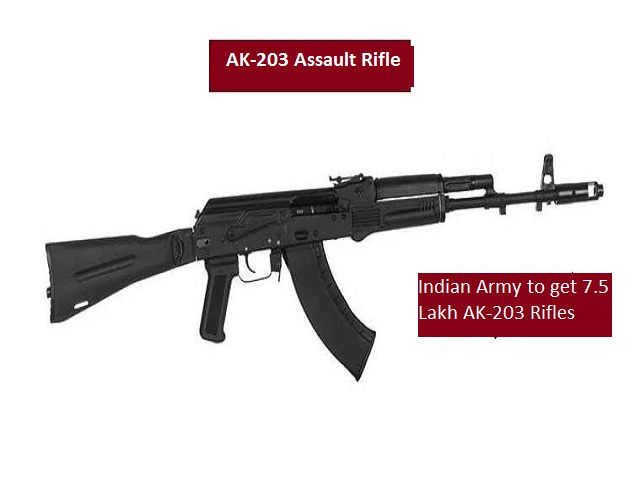 AK-203 Assault Rifles in News: The Indian Army is all set to sign an agreement with Russia for the purchase of the AK-203 assault rifles. As per the plan, one lakh rifles will be imported from Russia in the first phase while the remaining 6.5 lakh rifles will be manufactured in India.

This ordinance factory will produce the latest ranges of iconic Kalashnikov (AK-203) rifles. This joint venture will help the armed forces in the country and strengthen national security.

• It is considered as the most modern and reliable rifle of the AK series.
• The AK-203 is a convertible rifle. It can be used in semi-automatic and automatic ways.
• The AK-47 is the most basic model, followed by 74, 56, 100 series, and 200 series.
• According to media reports, the new assault rifle will be about 3.25 feet in length. A rifle loaded with bullets will weigh about 4 kg.
• It will be easy to handle for army personnel in any operation. It will be very effective even in night operations.
• It can fire 600 bullets in a minute and ten bullets can be fired in a second.
• Its new range will be up to 400 meters so that a soldier can hit a target from a long distance.
• AK-203 will be constructed with just eight to nine parts and it can be assembled in just one minute.

Also Read | Word of Decade: ‘They’ gets highest votes, check out why!