Indian actress Katrina Kaif has been named as the new ambassador of the international award-winning non-profit organisation, Educate Girls. For over a decade now, the NGO has been partnering with the Indian government in bringing out-of-school girls back to school. 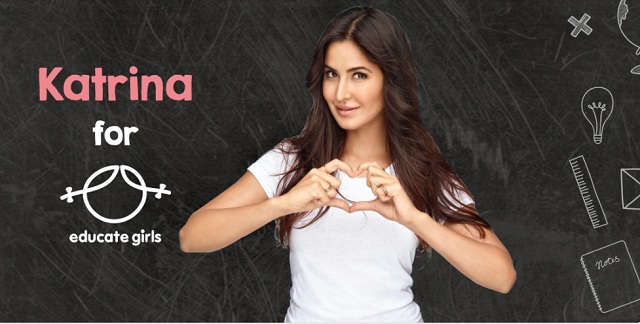 Indian actress Katrina Kaif has been named as the new ambassador of the international award-winning non-profit organisation, Educate Girls.

Speaking on the occasion, Safeena Husain, Founder of Educate Girls said that it is a moment of immense honor for Educate Girls to have Katrina Kaif as an Ambassador. With Katrina as an advocate, the NGO hopes to unite voices and amplify conversations on the subjects of gender equity and girls' education. It also hopes to contribute to the national mission of "Beti Bachao, Beti Padhao'.

Through her association with Educate Girls, Kaif attempts to bring renewed focus to girl child education and gender equality.

"For over a decade now, Educate Girls has been partnering with the government in bringing out-of-school girls back to school. I am committed to support Educate Girls in the endeavour to build an India where girls have equal opportunities to access quality education," the actress said.

Katrina, who has spent time acquainting herself about the several barriers to girls' education in the country, especially in the rural and tribal regions, calls the Educate Girls' programme model a highly sustainable one, as it is based on the principles of community-ownership and collaboration that involves the families, village leaders, local administration and school authorities to jointly push for change.

In partnership with the Indian government, the NGO has managed to bridge the gender gap in education across 12,000 villages, working with over 21,000 schools in the states of Rajasthan and Madhya Pradesh over the last ten years.