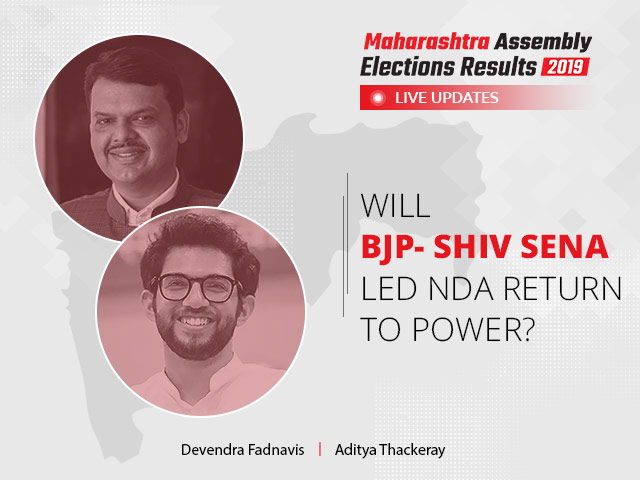 Maharashtra Election Result 2019 Live Updates: The BJP and Shiv Sena are all set to retain power in Maharashtra but the alliance has won fewer seats this time in comparison to the 2014 state elections. The two parties together have won 161 seats. The BJP also claims the support of other smaller parties and the 13 independents.

Maharashtra CM Devendra Fadnavis confirmed in a press conference yesterday that the alliance has the support of all the independent MLAs, most of whom are either BJP or Shiv Sena rebels. This would mark the first time that a non-Congress government has come back for a second term in Maharashtra.

Who will be the CM is the biggest question of the hour, as Shiv Sena Chief Uddhav Thackeray confirmed that the party would be pushing for the 50:50 formula, which was the base of their pre-poll alliance with the BJP. Under the formula, both the allies had agreed to share the CM post for two and a half years subject to certain conditions. Fadnavis confirmed that the party will be going ahead with what was decided between them and the Sena.

Prime Minister Narendra Modi tweeted saying that the party is humbled with the support it has received in the state and that it will continue its work towards Maharashtra’s progress. 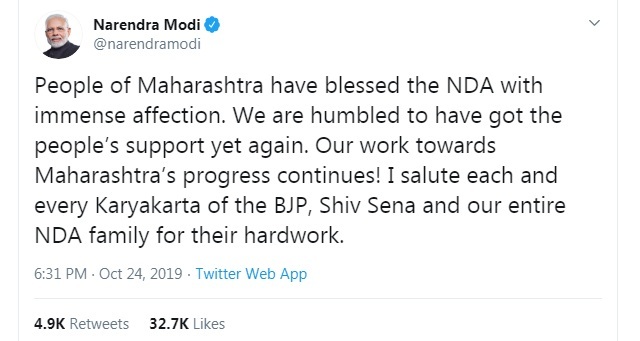 The BJP and Shiv registered victories in the Marathwada and Konkan region and the Mumbai Metropolitan but lost out on some other key seats.  The biggest gainer was the Sharad Pawar-led NCP, which regained its voter base in western Maharashtra by winning the votes of the dominant Maratha community in the region.

Maharashtra CM Devendra Fadnavis, also confirmed that they have the support of the 15 independent MLAs. Most of the independents are BJP or Shiv Sena rebels. "They have contacted me and they are ready to come with us. Others may also come but these 15 will come with us," Fadnavis assured.

Highlights @ 5:06 PM: "We are going to go ahead with what was decided between the BJP and Shiv Sena. You will get to know about it when the time is right," Maharashtra CM Devendra Fadnavis. 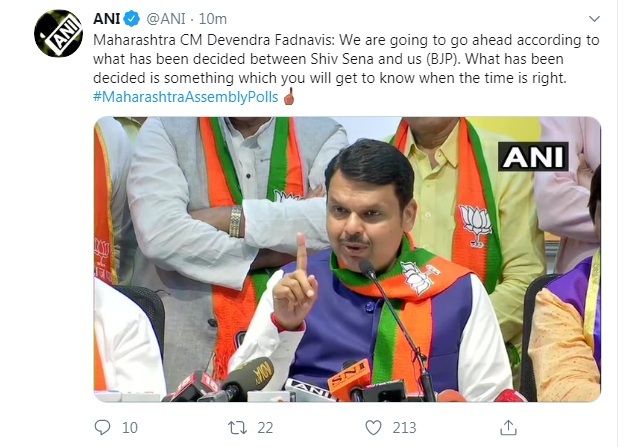 Highlights @ 4:45 PM: Shiv Sena Chief confirms reports that he will be pushing for 50: 50 formula

Shiv Sena chief Uddhav Thackeray, while briefing the media stated that what was decided earlier, that will only happen. The Sena chief confirmed that the party will indeed be pushing for the 50:50 formula. He said that this was agreed upon before the elections and so it will be discussed with their ally, the BJP. 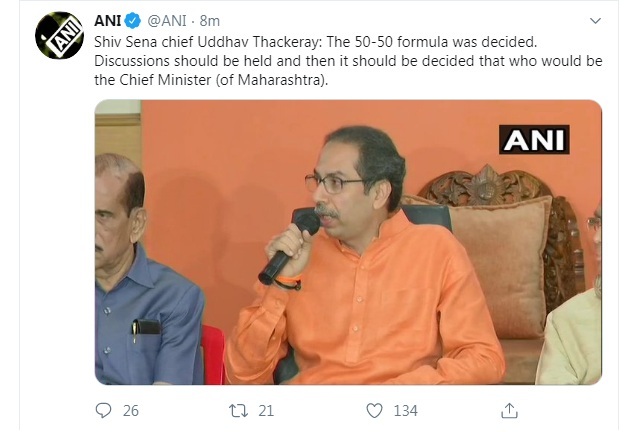 Six ministers in Devendra Fadnavis cabinet were defeated in the Maharashtra assembly elections 2019:

BJP's Rahul Narvekar has won the Colaba seat with a margin of over 16,000 votes. He defeated Bhai Jagtap of Congress. NCP's Ajit Pawar has won Baramati with a margin of 1.62 Lakh votes, one of the highest win margins so far. There was a huge setback for BJP's Pankaja Munde, who had to concede defeat to cousin Dhananjay Munde in Parli.

The Election Commission has declared the results of 30 seats. While the BJP has secured victory on 14 seats, the Shiv Sena has won 10, Congress has won 7 and the NCP has won 5 seats. The BJP is still leading in 86 seats, Sena in 48, Congress in 36 and NCP in 50.

The NCP President Sharad Pawar during a press conference stated that the Congress and NCP together along with other allies will decide their future course of action. He completely turned down the idea of going with Shiv Sena. Pawar said, "Power comes, power goes but it is important to remain committed to a cause and we thank people for the love they showed." 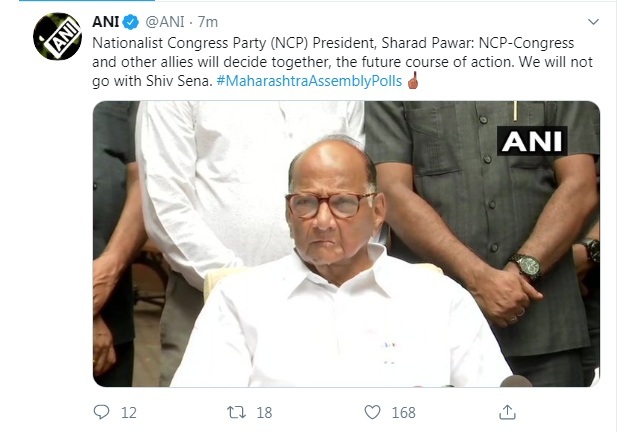 In the updated list of results by the Election Commission, the BJP has won 4 seats, Shiv Sena 2, NCP and independent one each. Overall, the final results have been declared for 9 seats.

According to the official Election Commission data, the BJP and Shiv Sena have won two seats each and one seat has been won by an independent. As per reports, NCP's Ajit Pawar has also won from Baramati and Congress' Ashok Chavan has won from Bhokar. However, an official confirmation is awaited on the same from the Election Commission.

Election Results Maharashtra 2019 Highlights @ 12:45 PM: Key Constituencies: Who is leading and who is trailing?

Pankaja Munde is trailing from Parli by over 24,000 votes.

BVA’s Hitendra Thakur is leading in Vasai by 7,000 votes.

Shiv Sena is strengthening its hold on Maharashtra with a lead in 61 seats, according to official trends by the Election Commission. With its increasing strength in the state, Shiv Sena is likely to bring up the 50-50 formula, under which both the BJP and Shiv Sena will have the CM post for 2 and a half years each. Speaking on the same, Shiv Sena's Sanjay Raut said that he is going to meet Uddhav Thackeray. 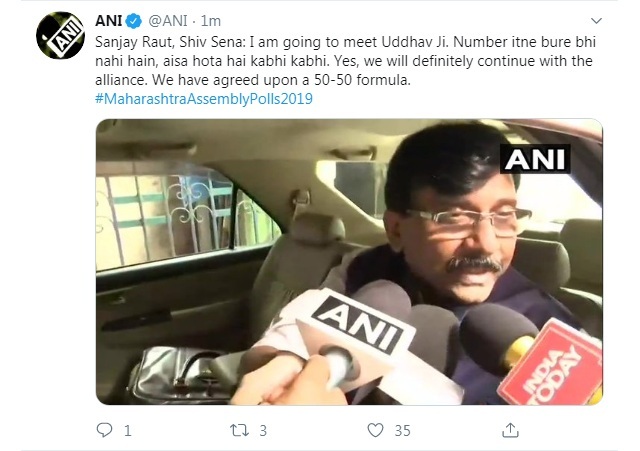 The Sharad Pawar led-NCP is faring better than the Congress by securing lead in 52 seats, while the Congress is leading in 41 seats. The NCP has performed well especially in western Maharashtra. 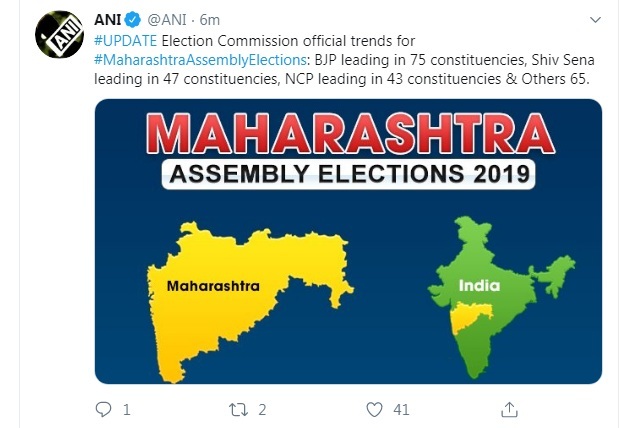 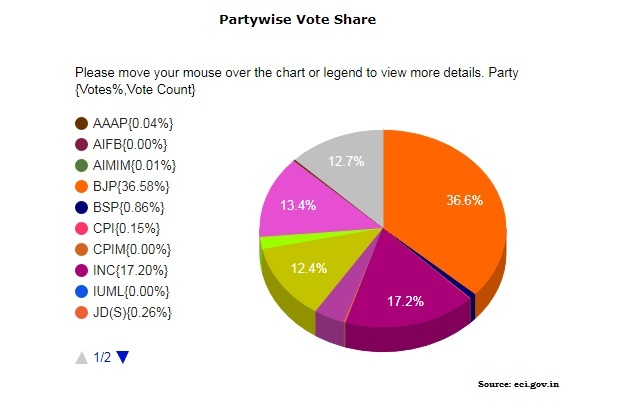 The MNS yet to open its account - The trends have not given Raj Thackeray-led MNS even one seat. The Shiv Sena is likely to completely overshadow the Maharashtra Navnirman Sena (MNS). According to initial trends, the BJP is currently leading in 107 seats and Shiv Sena is leading in 55 seats. The Congress and NCP are jointly leading in 60 seats

As per official Election Commission trends, the BJP is leading in 21 constituencies, Shiv Sena in 13, while in the opposition- the Congress is leading in 5 seats and the NCP is ahead in 15 seats. 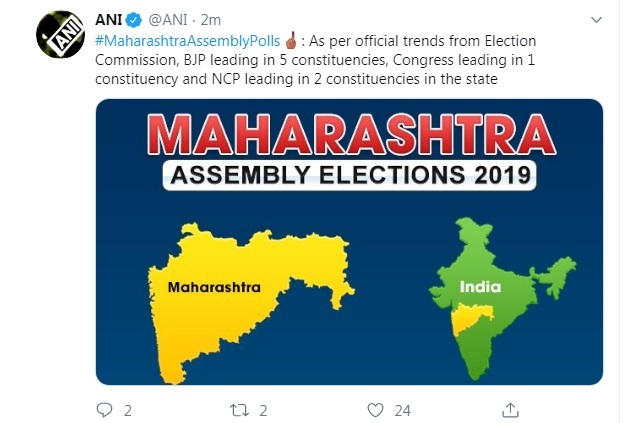 The BJP-Shiv Sena alliance is just 11 seats away from majority mark. These are the initial trends. The NCP is ahead of Congress in the seats.

Highlights @ 8:34 AM: NCP ahead of Congress in Maharashtra

NCP is currently leading in 20 seats in Maharashtra, while Congress is leading only in 14 seats.

Highlights @ 8:28 AM: Key candidates leading from their seats

The BJP is performing better than the Shiv Sena in Maharashtra. The BJP is ahead in 50 seats on its own. The exit polls predicted the BJP to win the majority on its own in the state.

Highlights @ 8:20 AM: NDA crosses 50 mark in Maharashtra in initial trends

NDA is currently ahead in more than 50 seats, UPA is ahead in only 20 seats. Though these are initial trends, they are in line with the exit polls.

These are initial trends as postal ballots are being counted initially. The trends are similar to the exit polls and support the NDA alliance. There are 1, 17,000 ballot papers in Maharashtra.

NDA is ahead in 11 seats in Maharashtra.

Highlights @ 8:05 AM: Will the BJP-Shiv Sena create history?

For the first time, a non-Congress government is predicted to come back for a second term.

Highlights @ 8:00 AM: Counting begins in Maharashtra.

The counting has begun for all the 288 seats in the Maharashtra state assembly. The postal ballots are being counted first. 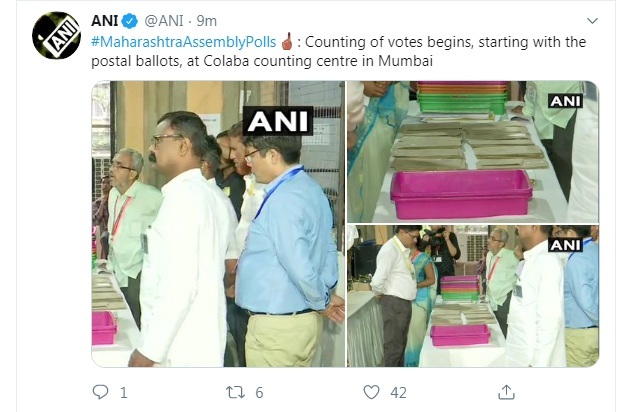 Maharashtra Election Result 2019 Highlights @ 7:25 AM: In the 2014 elections, the BJP and Shiv Sena had contested separately. The parties came together after the election results were announced, as neither had succeeded in gaining the majority on their own.

Maharashtra Election Result 2019 Highlights @ 7:15 AM: The BJP-Shiv Sena had a pre-poll seat-sharing agreement, as per which, the BJP contested in 150 seats and Shiv Sena contested in 124 seats. The rest of the seats were given to smaller allies of the NDA.

Maharashtra Election Result 2019 Highlights @ 7:10 AM: Preparations are underway for the beginning of the counting of votes. The Maharashtra Assembly elections 2019 were held for 288 seats.

Maharashtra Election Result 2019 Highlights @ 6:45 AM: All exit polls predict a massive win for the BJP-Shiv Sena alliance in Maharashtra. The NCP is projected to perform better than Congress.

Maharashtra Election Result 2019 Highlights @ 6:40 AM: The key parties in Maharashtra elections 2019 include the BJP, Shiv Sena, NCP and the Congress. The other parties include MNS, CPI, CPM, BSP and Vanchit Bahujan Aghadi.

Maharashtra Election Result 2019 Highlights @ 6:20 AM: In total, 3,237 candidates are contesting elections this time in Maharashtra, among whom 235 are women.

Maharashtra Election Result 2019 Highlights @ 6:15 AM: Maharashtra had witnessed single-phase voting in all its 288 seats. Less voter turnout was recorded this time in comparison to the 2014 assembly elections.

Maharashtra Election Result 2019 Highlights @ 6:05 AM: The exit polls for Maharashtra 2019 were released after 6.30 pm on October 21. The Election Commission had prohibited the release of the exit polls during the elections.