The Union Government on October 2, 2018 launched the Mahatma Gandhi’s 150th birth year celebrations, marking the beginning of the final year of the Swachh Bharat Mission (SBM).

The Swachh Bharat Mission will culminate on October 2, 2019, the 150th birth anniversary of Father of the Nation, Mahatma Gandhi.

Prime Minister Narendra Modi on September 15, 2018 launched the mega countrywide campaign- Swachhata hi Seva Campaign 2018. The 2018 campaign followed the success of the 2017 campaign and culminated with the Mahatma Gandhi International Sanitation Convention (MGISC) that was held from September 29 to October 2, 2018.

The culmination of Swachhata hi Seva Campaign and MGISC marked the start of the 150th birth year celebrations of Mahatma Gandhi.

The Mahatma Gandhi International Sanitation Convention (MGISC), a 4-day event organised by the Union Ministry of Drinking Water and Sanitation, came to a close on October 2. The Convention aimed to share sanitation success stories and lessons from the participating countries.

The Convention included a field visit, plenary sessions, and technical sessions. A parallel exhibition of sanitation innovations was held. 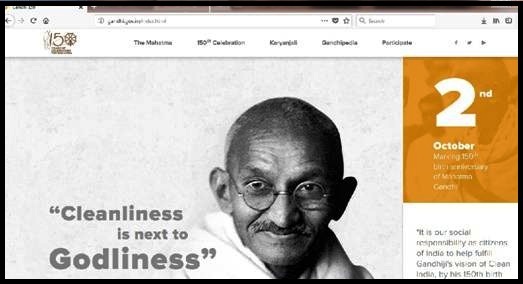 • The web portal ‘http://gandhi.gov.in’ is participatory in nature and all the participating organisations will be able to upload their activities regarding commemoration on the website.

• It has a unique feature ‘Gandhipedia’ which will be a repository of Gandhian knowledge and will continue to grow with time.

• Information related to Gandhian literature, philosophy, audios and videos, rare photos are available in the portal.

• The web portal will identify visitors from different geography and serve them personalised information.

• Organisations & individuals can join celebration and submit their Karyanjali or work through an easy upload process.

Constitution of National Committee and Executive Committee to plan commemoration

This Committee includes Vice-President, Prime Minister, Chief Ministers of all states of the country, representatives from across the political spectrum, Gandhians, thinkers, and eminent persons from all walks of life.  The Committee was tasked to guide and approve policies, programmes and activities for the commemoration and will also supervise implementation of the decisions taken from time to time.

One meeting each of the National Committee and Executive Committee was held on May 2, 2018 and July 18, 2018 respectively.