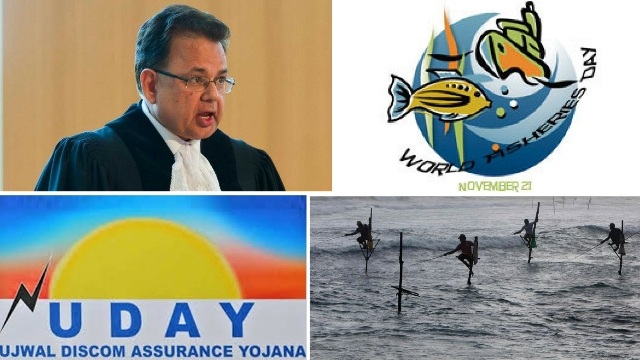 Bhandari received 183-193 votes in the General Assembly and secured all the 15 votes in the Security Council after separate and simultaneous elections were held at the UN headquarters in New York.

Bhandari and Britain's Christopher Greenwood were locked in a neck-to-neck fight for re-election to the ICJ. However, in a dramatic turn of events Britain withdrew its candidate from the election.

The Government of India signed four Memorandums of Understanding (MoU) under UDAY scheme with Nagaland and three Union Territories (UTs) including Andaman & Nicobar Islands, Dadra & Nagar Haveli & Daman & Diu for operational improvements, on the occasion of the scheme’s 2nd anniversary.

These State/UTs have joined only for operational improvement and shall not undergo financial restructuring/issue of bonds under the scheme. With the development, Ujwal DISCOM Assurance Yojana (UDAY) club has now grown to 27 states and 4 UTs.

World Fisheries day was celebrated across the world on 21 November 2017.

The day is celebrated annually by the fishing communities through rallies, workshops, public meetings, cultural programs, dramas, exhibition, music show and demonstrations to highlight the importance of maintaining the world's fisheries.

The day helps in highlighting the critical importance of water to human lives and the lives it sustains, both in and out of water.