NASA has released some high-resolution pictures of lander Vikram’s landing site. NASA claimed on the basis of these pictures that Chandrayaan-2 lander Vikram had a hard landing on the lunar surface. These pictures have been clicked by Lunar Reconnaissance Orbiter Camera (LROC).

The National Aeronautics and Space Administration (NASA) mentioned on its twitter handle that LRO mission captured the images of the targeted landing site of India’s Chandrayaan-2 lander Vikram. NASA said that the team was not able to locate the lander Vikram. According to NASA’s information, the landing site was located about 600 kms from the South Pole. 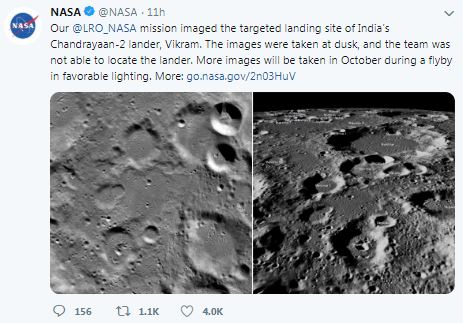 The Vikram Lander attempted to land on a flat surface, but it could not happen as expected. Just before its landing, ISROs communication with lander Vikram ended completely. According to a statement released by NASA, 'It is clear that Vikram’s hard landing took place on the lunar surface. It is not yet cleared at which location the spacecraft landed. The photos have been taken from a distance of 150 km from the centre.’

India’s Vikram lander was scheduled to land on the lunar surface on September 6. It was India’s first attempt on the south pole of the Moon. LROC captured the image when it was dusk and large shadows covered the terrain. NASA also claimed that it is possible that the Vikram lander is hiding in a shadow. NASA will do one more attempt to find out Vikram lander in October because that time lighting will be favourable for LRO to capture the images.

NASA has reported that Chandrayaan-2 lander Vikram made a landing between Simpelius N and Manzinus C craters on the flat surface of the moon. Unfortunately, the landing was not successful and the location of the spacecraft could not be announced. The photo by NASA was taken from a camera mounted on its orbiter. This photo shows the area of 150 km of the site.