During the visit, India and Sweden signed a ‘Joint Declaration on India-Sweden Innovation Partnership for a Sustainable Future’ and adopted a Joint Action Plan to promote bilateral cooperation. 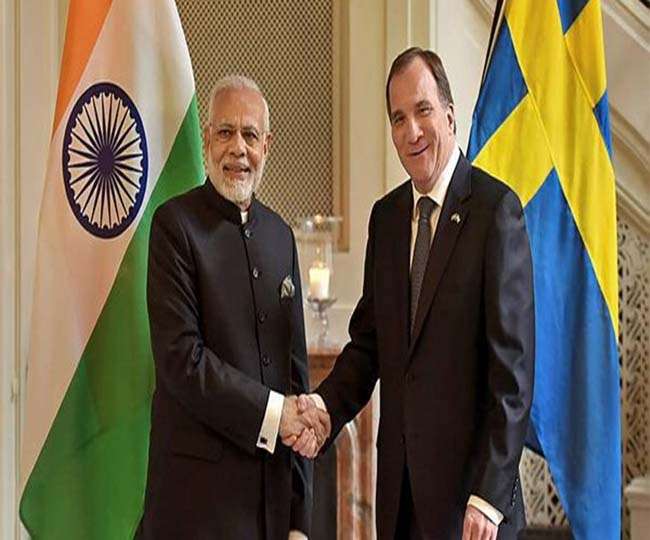 PM Modi visited Sweden at such a crucial time when India-Sweden economic ties have strengthened significantly. Since the year 2000, around 170 Swedish companies have invested USD 1.4 billion in India and over 70 Indian companies have established their presence in Sweden. Today, India-Sweden annual bilateral trade stands at USD 1.8 billion, approximately.

This was the first visit by an Indian Prime Minister to Sweden after almost three decades. However, both the sides have met earlier when PM Stefan Lofven visited India in February 2016 with a strong business delegation to attend the ‘Make in India’ week in Mumbai.  PM Lofven also participated in ‘Make in India: Sweden 2017’ event which was organised in Stockholm in October 2017.

During his visit, PM Modi invited top Swedish firms to invest in India and participate in flagship initiatives of the country.

PM Modi also emphasised that there are excellent investment opportunities for Swedish firms in India in fields like smart cities, clean technology, universal housing, renewable energy, start-ups and many others.

In turn, Swedish companies showed their commitment to invest USD 1.1 billion in India over the next two years. The major investors would be the likes of Ikea, AstraZeneca and Volvo trucks.

During the visit, both the sides also hosted the ‘India-Nordic Summit: Shared Values, Mutual Prosperity’ on April 17, 2018. The summit was attended by all Nordic Prime Ministers- PM Lars Lokke Rasmussen of Denmark, PM Juha Sipila of Finland, PM Katrin Jakobsdottir of Iceland and PM Erna Solberg of Norway.

PM Modi with the Heads of Nordic Countries

A number of MoUs were signed on the occasion between India and Nordic countries. These were:

MOU between India and Sweden on Joint Declaration

India and Sweden signed the Joint Declaration on India-Sweden Innovation Partnership for a Sustainable Future. The MoU was signed between the Union Ministry of Science and Technology and the Ministry of Enterprise and Innovation of Sweden.

MOUs signed between India and Denmark

• MOU on Urban Development: A Memorandum of Understanding (MoU) was signed between the Union Ministry for Housing and Urban Affairs and the Ministry of Industry, Business and Financial Affairs of Denmark for cooperation in the field of sustainable and smart urban development.

• MOU on Animal Husbandry: India and Denmark signed a MoU for cooperation in the fields of animal husbandry and dairying. The MoU was signed between India’s Department of Animal Husbandry, Dairying & Fisheries and the Danish Veterinary and Food Administration.

• MOU on Food Safety: The Food Safety and Standards Authority of India and the Danish Veterinary and Food Administration signed a MoU on cooperation on Food Safety.

During the visit, India and Sweden signed a ‘Joint Declaration on India-Sweden Innovation Partnership for a Sustainable Future’ and adopted a Joint Action Plan to promote bilateral cooperation.

The Indo-Swedish Joint Commission on Scientific and Economic Affairs, Foreign Office Consultations and Joint Working Groups will oversee the implementation of this Action Plan.

• Both the sides will initiate an ‘Innovation Partnership for a Sustainable Future’ and will address societal challenges such as climate change and sustainable development through innovation.

• Under the MoU signed between the Swedish Patent Registration Office and the Department of Industrial Policy and Promotion of India, both the sides will carry out cooperative activities in the field of intellectual property rights.

• It seeks to strengthen India-Sweden business cooperation through the India-Sweden Business Leaders Round Table (ISBLRT).

Smart Cities and Next Generation Transport

• It calls for cooperation in the areas of electro-mobility, renewable fuels, railways policy development, safety, training maintenance of railways.

• It aims to expand research and innovation on new innovative energy technologies through the India-Sweden Innovations’ Accelerator.

It encourages joint efforts towards women’s empowerment by skilling women through projects such as "Kraftsamla”- a project undertaken by Swedish and Indian actors in Pune. The project provides skills training to women for jobs such as forklift drivers, warehouse managers, assembly operators and more.

• It calls for enhancing the Indo-Swedish dialogue on defence cooperation and continue with the India-Sweden defence seminars in India and Sweden in 2018-19.

• It acknowledges the importance of bilateral cooperation on space research, technology, innovation and applications.

• It calls for a MoU on space cooperation to augment Earth observation missions, planetary exploration and satellite ground station activities, through an Indo-Swedish Space Seminar and a visit by an Indian delegation to Swedish space establishments.

• It calls for exploring possible collaboration between the European Spallation Source (ESS) hosted by Sweden and Indian partners.