The V Narayanaswamy-led Congress government lost the floor test held in Puducherry Assembly. The Puducherry Assembly Speaker VP Sivakolundhu announced that the Chief Minister has failed to prove his majority and adjourned the house sine die. 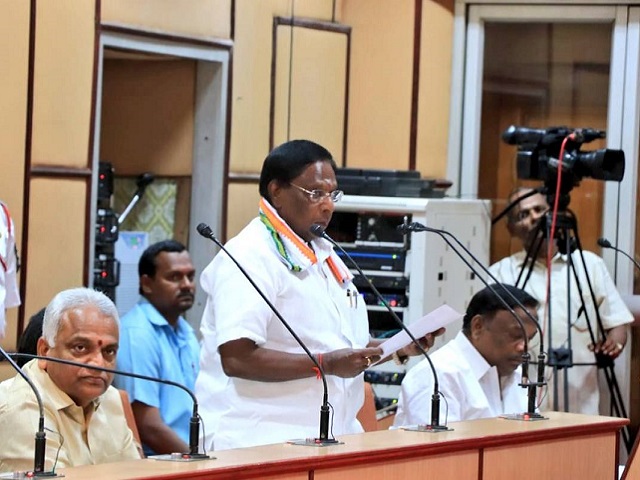 The V Narayanaswamy-led Congress government lost the floor test, following which the Puducherry Assembly Speaker VP Sivakolundhu announced that the Chief Minister has failed to prove his majority and adjourned the house sine die.

Prior to the floor test, the Puducherry Chief Minister had accussed the opposition- Bharatiya Janata Party (BJP)- for forcibly trying to implement Hindi in the UT, which follows the two-language system.

He had also claimed that the former Lieutenant Governor Kiran Bedi and Central Government had colluded with the opposition to topple his government in the Union territory. However, he stated that they managed to off the last 5 years, as their MLAs stayed united.

He had further slammed the centre for betraying the people of Puducherry by not granting funds requested by the UT.

The Puducherry CM reiterated that they had formed the government with the support of DMK and independent MLAs and after that they had faced various elections and won all the by-elections. He said that it was clear that people of Puducherry trust them.

He further also stated that they had demanded full Statehood to stop the nominated LG from snatching the rights of the people of Puducherry.

Telangana Governor Tamilisai Soundararajan, who was given additional charge as Puducherry Lt Governor on February 16, 2021 after removal of Kiran Bedi from the post, had ordered a floor test in assembly on February 22, 2021.

The floor test came amid a series of resignations by MLAs including Congress MLAs A John Kumar and Lakshmi Narayanan and DMK MLA K Venkatesan.
The Union Territory of Puducherry is scheduled to go to polls later this year. The Election Commission will announce the dates soon.