The 2017 Spanish Super Cup was the 31st edition of the tournament. 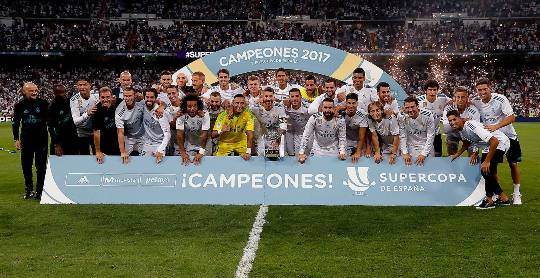 Real Madrid achieved the feat without Cristiano Ronaldo, who was slapped with a five-game ban for pushing the referee after he was sent-off in the first leg.

• Real Madrid is a professional football club based in Madrid, Spain.

• The football club was founded on 6 March 1902 as Madrid Football Club.

• The word Real is Spanish for Royal and was bestowed to the club by King Alfonso XIII in 1920 together with the royal crown in the emblem.

• Real Madrid is one of three founding members of La Liga that have never been relegated from the top division, along with Athletic Bilbao and Barcelona.

• The football club was recognised as the FIFA Club of the 20th Century on 11 December 2000, and received the FIFA Centennial Order of Merit on 20 May 2004.

• The Spanish Super Cup is a Spanish football championship contested by the winners of La Liga and the Copa del Rey.

• The 2017 Spanish Super Cup was the 31st edition of the tournament.