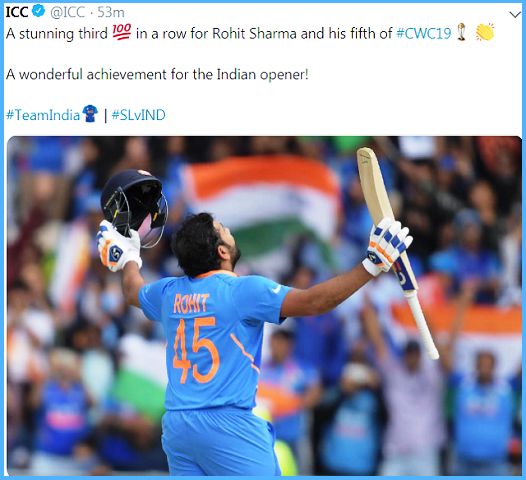 Rohit Sharma: A Highest Run Scorer with Most centuries, Highest Sixes, & a 1000-run mark in 2019: Indian vice-captain Rohit Sharma sets several records in the World Cup 2019 tournament. He earlier became the first Indian player to hit four centuries in a single edition of the World Cup and the first Indian batsman to cross 1000-run mark in ODIs in 2019 after hitting a century in India vs Bangladesh cricket match. Sharma achieved this feat after he hit 104 runs against Bangladesh. Have a look at the various records set by Rohit till now:

Fifth Century - Rohit Sharma notched up his 5th century of the World Cup 2019 during the India vs Sri Lanka match and became the leading run-scorer. This feat makes him first batsman ever to hit 4 centuries in a single edition of the ICC World Cup.

Player of the India vs Bangladesh match - Hitman Rohit became the Player of the Match for his outstanding innings against Bangladesh during the ongoing World Cup 2019 tournament.

Rohit completed 1000 runs in a calendar year for the third time in a row and joins the list of batsmen featuring Sachin Tendulkar, MS Dhoni and Virat Kohli. Sharma scored 1293 runs in 2018 and 1030 runs in 2019 till now. This four-figure is yet to become stronger during the ICC World Cup 2019.

Have a look at the previous record-holders

Rohit Sharma has maintained his exceptional form since the start of the ICC World Cup 2019. His performance has washed away the doubts of all those who had questioned and criticized him before the beginning of tournament.