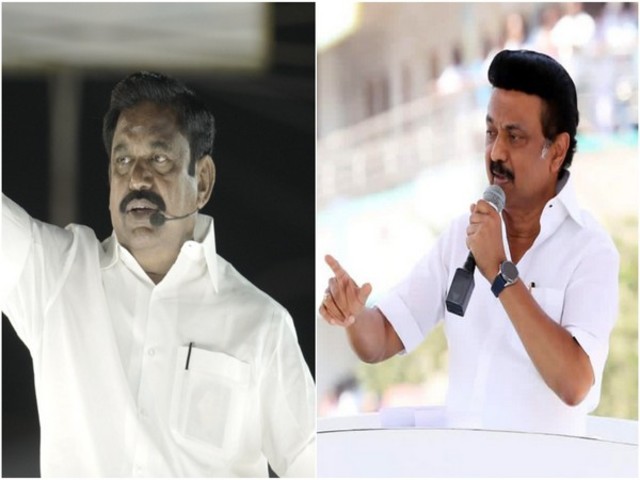 In Coimbatore (South), MNM's Kamal Haasan is in the leading by a margin of 534 votes.

However, TTV Dhinakaran, who had chosen the Kovilpatti constituency rather than getting re-elected in his RK Nagar constituency, is trailing behind AIADMK's Kadambur C Raju. by a margin of 1,359 votes.

The 2021 TN Assembly Elections are the state’s first elections since the death of two key leaders, J. Jayalalithaa, AIADMK, and M. Karunanidhi, DMK.

The counting of votes of the TN Assembly Elections 2021 will witness a power-packed political battle between a total of 3,998 candidates across 234 constituencies of which,

The key candidates to watch out for are:

Tamil Nadu Chief Minister and AIADMK leader Edappadi Palaniswami is one of the key players in the 2021 TN Assembly Elections. He first appeared as a volunteer in the AIADMK in 1974. In 2017, he became the CM after O Panneerselvam resigned after Jayalalithaa’s death.

Deputy Chief Minister O Panneerselvam, also joint coordinator of AIADMK, is another key candidate to look out for in the 2021 TN Assembly Elections. He was also a close aid of Late Jayalalithaa. He is contesting from the Bodinayakannur constituency. He has never lost in this constituency since 2001. He is facing Thanga Tamilselvan of the DMK.

DMK Chief MK Stalin, also the son of late M Karunanidhi, is contesting from the Kolathur constituency. He has been representing this constituency since 2011. He started his political career after winning for the first time from Thousand Light constituency in 1989. He has held the position of the Mayor of Chennai and also the Deputy Chief Minister of Tamil Nadu.

Stalin is facing Aadi Rajaram of AIADMK and J Arumugham of AMMK. If the DMK-Congress alliance wins the 2021 state assembly elections, Stalin would become the Chief Minister of Tamil Nadu for the first time.

Udhayanidhi Stalin, son of DMK chief MK Stalin, is making his political debut in the 2021 Tamil Nadu Assembly elections. He is contesting from the Chepauk constituency which is in the heart of Chennai. He is facing AVA Kassali (PMK), I Rajendran (AMMK), Muhammad Ithris (IJK), and Jayasimaharaja (NTK).

Chepauk constituency has been represented by Late M Karunanidhi thrice from 1996 to 2011 and DMK has enjoyed a stronghold here.

Actor-turned politician and the Makkal Needhi Maiam (MNM) party Kamal Haasan is making his political debut from the Coimbatore South. He is facing Mayura Jayakumar, Congress ally of DMK, and Vanathi Srinivasan, BJP ally of AIADMK.

TTV Dhinakaran is the founder of the Amma Makkal Munettra Kazhagam (AMMK). He is an MLA from Dr Radhakrishnan Nagar in Chennai. In 2016, Late Jayalalithaa of AIADMK had won the RK Nagar assembly constituency.

In 2017, Dhinakaran had won the RK Nagar assembly constituency. However, he is not contesting for re-election from Dr Radhakrishnan Nagar but rather from the Kovilpatti constituency. He will face Kadambur C Raju of AIADMK and K Sreenivasan, CPM ally of DMK.