First-fully indigenously developed 'Glide' bomb has been successfully tested by the Indian Air Force in Chandipur in Odisha. The bomb is a lightweight, long-range precision-guided anti-airfield weapon, designed to destroy ground targets such as runways, bunkers, aircraft hangers and other reinforced structures. 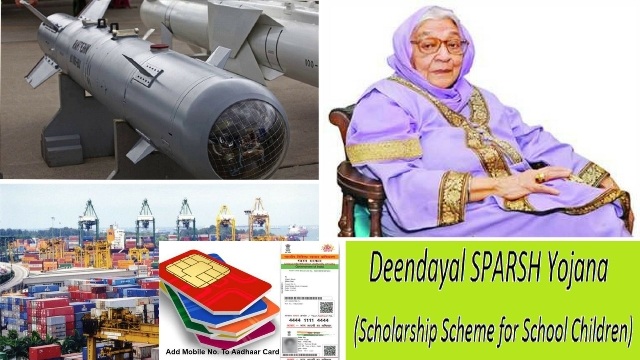 First-fully indigenously developed 'Glide' bomb has been successfully tested by the Indian Air Force in Chandipur in Odisha.

The bomb is a lightweight, long-range precision-guided anti-airfield weapon, designed to destroy ground targets such as runways, bunkers, aircraft hangers and other reinforced structures. The bomb will allow the Indian Air Force to strike targets such as enemy airfields from a safe distance without putting pilots and aircraft at risk.

The development marks a major milestone in developing such weapons.

Krishna Sobti, renowned Hindi litterateur, will be honoured with the 53rd Jnanpith Award for the year 2017.

The 92-year-old writer was chosen for the prestigious award for her path-breaking contribution in the field of literature. She is known for experimenting with new styles and forms of writing and creating ‘bold’ and ‘daring’ characters in her stories who were ready to accept all challenges.

Her choice of subjects ranged from the Partition and relationships between man and woman, to the changing dynamics of the Indian society and the gradual deterioration of human values.

The Supreme Court on 3 November 2017 directed mobile service providers and banks to specify the last dates for linking mobile numbers and bank accounts to Aadhaar through SMSes and e-mails to millions of subscribers.

The ruling was given by a bench of Justices AK Sikri and Ashok Bhushan. The last date of linking mobile numbers with Aadhaar is 6 February 2018 and for linking Aadhaar with bank accounts is 31 December 2017.

However, the Union government has already filed an affidavit in the Supreme Court to extend the Aadhaar-bank account linking deadline to 31 March 2018.

The state government Haryana on 2 November 2017 signed a memorandum of understanding (MoU) with an integrated trade facilitation services organisation - Verbind - to set up a logistics and trading hub in the state.

Under the pact, the state will assist the organisation in obtaining the necessary approvals, registrations and clearances with reference to the projects from relevant departments, in line with existing rules and regulations.

The trading hub is expected to generate employment for around six lakh people and attract investment worth Rs 20,000 Cr.

Under the scheme, it is proposed to award annual scholarships to children studying in class 6-9, having good academic record and also pursuing Philately as a hobby through a competitive selection process in all postal circles.

To avail this scholarship, the child must be a student of a recognized school within India and the concerned school should have a Philately Club and the candidate should be a member of the Club.