The UDAN-4 scheme will focus on the priority regions including the northeast, hilly states and UTs J&K, Ladakh, Lakshadweep and Andaman & Nicobar Islands. 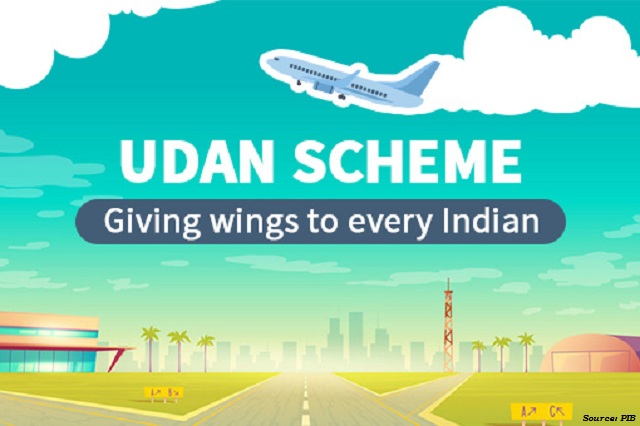 UDAN 4.0: The Union Government has launched the fourth round of the regional connectivity scheme, UDAN to boost connectivity to more remote and regional areas of the country.

UDAN, which stands for ‘Ude Desh Ka Aam Nagrik’, aims to make air travel affordable and widespread. The UDAN 4.0 will focus on the priority regions including the northeast, hilly states, Jammu and Kashmir UT, Ladakh and islands.

The Union Ministry of Civil Aviation launched the 4th round of the Regional Connectivity Scheme (RCS) UDAN following three successful rounds of bidding to enhance connectivity in the remote and regional areas of the country.

1. Revision of Viability Gap Funding (VGF) – The VGF provision for Category 2 / 3 aircraft (with more than 20 seats) has been enhanced for the operation of flights under RCS to priority areas. The VGF cap applicable for operation of category 1 / 1 A aircraft (below 20 seaters) has also been revised to incentivize the operation of smaller aircraft under the scheme.

2. Short-haul routes- The VGF provision would be restricted to routes with stage length of up to 600 km for the operation of category 2 / 3 aircraft. Beyond this, no monetary support would be provided. The table for the provision of VGF for various stage lengths would be available for stage length up to 500 km.

3. Prioritization framework – Under the scheme, airports already developed by the Airport Authority of India will be given higher priority for the Viability Gap Funding. The airports not part of the list but are located in the priority areas will be given priority next, followed by airports located in other areas.

The UDAN scheme was launched in October 2016 to make air travel affordable by providing connectivity to the under-served areas in the country by the revival of existing airports and airstrips.

Besides making travel affordable and accessible to all, the UDAN scheme aims to boost inclusive national economic development, development of air transport infrastructure in all regions and job growth.

The Aviation Ministry aims to develop short-haul routes. The Airport Authority of India also aims to develop no-frills airport in the future and the routes connecting such airports will be prioritized for awarding the Viability Gap Funding.