The ocean produces at least 50% of the Earth's Oxygen and is home to most of the Earth’s biodiversity. 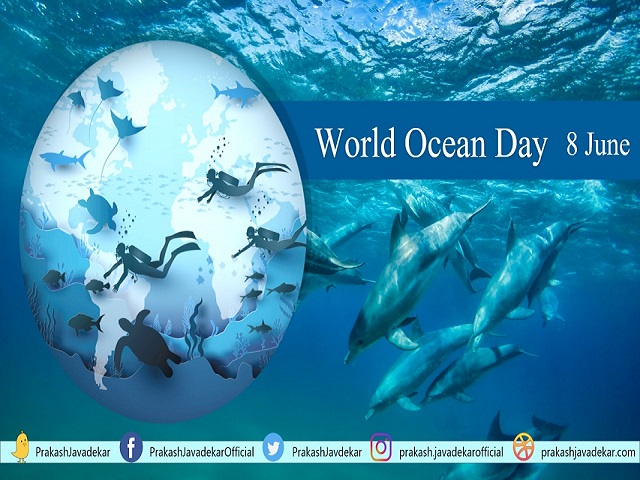 World Oceans Day 2021: World Oceans Day is observed every year on June 8th to remind us of the major role the oceans have in everyday life. According to the United Nations, the oceans are the lungs of our planet and a major source of food and medicine and a critical part of the biosphere.

World Oceans Day aims to inform the public of the impact of human actions on the ocean, develop a worldwide movement of citizens for the ocean, and mobilize the world’s population on a project for the sustainable management of the world's oceans.

World Oceans Day's theme this year is a declaration of intentions that launches a decade of challenges to achieve UN's Sustainable Development Goal 14, “Conserve and sustainably use the oceans, seas and marine resources”, by 2030.

The theme is especially significant in the lead-up to the UN Decade of Ocean Science for Sustainable Development, which will run from 2021 to 2030. The Decade is expected to strengthen international cooperation to develop scientific research and innovative technologies that can connect ocean science with the needs of society.

The Ocean: Life and livelihoods: Significance

• The ocean covers over 70 percent of the planet and is our life source, supporting humanity’s sustenance and that of every other organism on earth.

• The ocean also produces at least 50% of the Earth's Oxygen and is home to most of the Earth’s biodiversity.

• It is the main source of protein for more than a billion people around the world.

• The ocean is also key to our economy with an estimated 40 million people being employed by ocean-based industries by 2030.

According to the UN, we are now taking more from the ocean than can be replenished. The International body further said to protect and preserve the ocean and all it sustains, we must create a new balance, which is rooted in a true understanding of the ocean and how humanity relates to it.  It said that we must build a connection to the ocean that is inclusive, innovative and informed by lessons from the past.

The United Nations further tweeted on the occasion of World Oceans Day, calling for sustainable efforts to source fish and stop plastic pollution in order to save the oceans.

From eating local, sustainably-sourced fish to stopping plastic pollution, we all have a role to play to #SaveOurOcean.

UN Secretary-General Antonio Guterres said on the occasion, "As we work to end the pandemic and build back better, we have a once in a generation opportunity and responsibility to correct our relationship with the natural world, including the world's seas and oceans."

The UN Secretary-General also tweeted saying, "I had the privilege of growing up near the ocean. It pains me to see how overfishing, pollution and rising temperatures are destroying our oceans and biodiversity. As we mark #WorldOceansDay, let's end our war on nature & ensure the health of our oceans for future generations."

I had the privilege of growing up near the ocean.

It pains me to see how overfishing, pollution and rising temperatures are destroying our oceans and biodiversity.

As we mark #WorldOceansDay, let's end our war on nature & ensure the health of our oceans for future generations. pic.twitter.com/xRn1iVUz48

The 2021 Conservation Action Focus is protecting at least 30% of the blue planet for a healthy ocean and climate by 2030. A healthy ocean is a critical part of the solution to the climate crisis.

• The concept of a 'World Oceans Day' was first proposed in 1992 during the Earth Summit in Rio de Janeiro to celebrate the world’s shared ocean and personal connection to the sea and to raise awareness about the crucial role the ocean plays in our lives and the important ways people can help protect it.

• To create awareness for the same through an observance, the UN General Assembly passed a resolution on December 5, 2008 to designate June 8 as World Oceans Day.